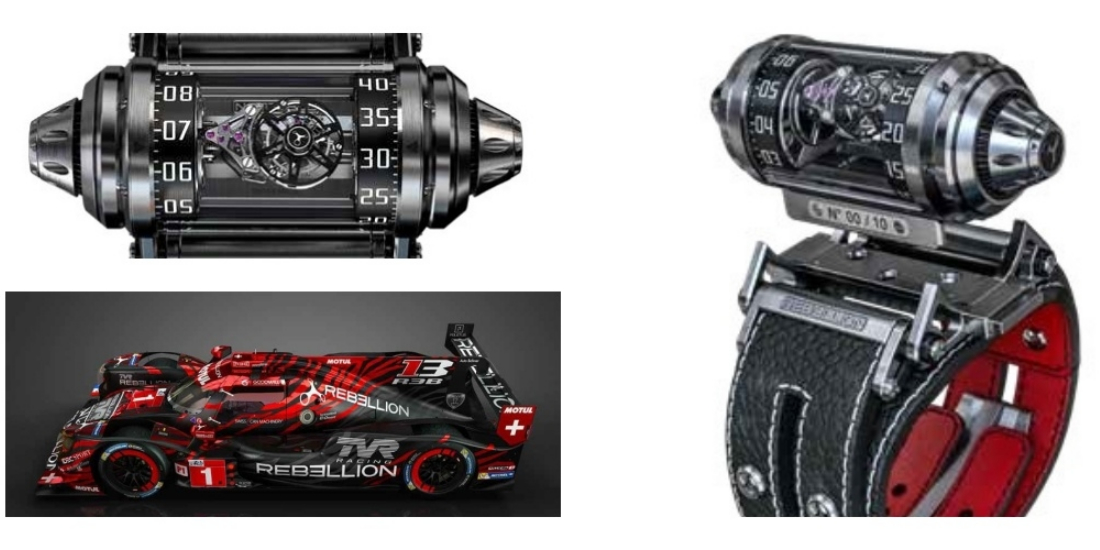 Released from the traditional constraints of shape and usage, the new Weap-One by Rebellion veers firmly often the beaten track. Equally at home on the wrist, in a pocket or displayed as a table clock, this mechanical masterpiece breaks free of existing rules. Its 60-second asymmetrical flying tourbillon, suspended between the hours and minutes rollers, rotates around multiple axes. This original and innovative characteristic enables it to defy gravity on all sides. Featuring two wheel-nut crowns setting the perfect finishing touch, this magnificent model is as revolutionary as it is unique. E

Inspired by racing-car suspension systems, the exclusive Weap-One Manufacture movement has been developed in cooperation with Concepto. The hours appear on the left and the minutes on the right, while the tourbillon is cleverly suspended between two platinum rollers turning in opposite directions and at different speeds. Several differential gears enable the flying tourbillon to spin around several axes, thereby making this manual-winding ‘engine’ entirely independent of gravity.

The movement of Weap-One is housed in a detachable tube. To facilitate handling, this technical feat is surrounded by a frame composed of two pushbuttons fitted on the titanium chassis. A series of accessories will soon be available to enhance this timepiece through various uses. Crafted in partnership with Roland Iten, producer of ultra-exclusive mechanical accessories, they will transform Weap-One into a desk clock, a car dashboard clock or a pocket watch