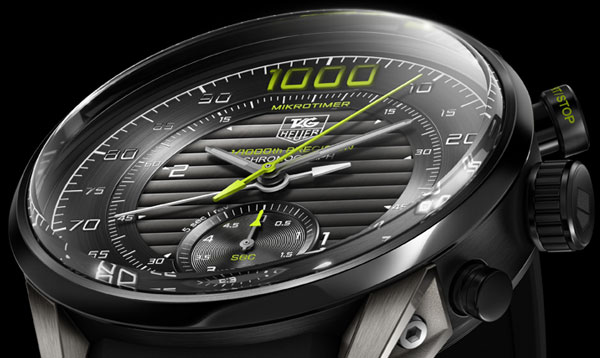 The TAG Heuer Haute Horlogerie story is a genuinely human saga involving an extraordinary team of dedicated thinkers, watch masters, engineers and craftsmen working in Switzerland but also collaborating with an international network drawn from renowned high-tech companies, universities and research institutes. The techniques used in the design, prototyping and manufacturing of TAG Heuer’s Haute Horlogerie masterpieces (MikrotourbillonS, the Mikrotimer, the Mikrogirder, the Mikrograph, Monaco V4, the Monaco Twenty-Four or Link Lady Diamond Star, see next page) are the same as those used to develop complex aerospace systems. Tools, techniques and expertise are drawn from an eclectic fusion of automobile and IT industries, applied mathematics, chemistry, climatology, computer engineering and micro-mechanical sciences. TAG Heuer’s engineers and watchmakers design, develop and manufacture in-house in La Chaux-de-Fonds. The 40-member team share a singular vision and passion — a commitment to push beyond limits and create an entirely new paradigm for mechanical movement dynamics. TAG Heuer is currently building a fourth atelier in the region to meet the new challenges.
TAG Heuer’s most ambitious luxury chronograph to date, the MikrotourbillonS is not only the world’s fastest tourbillon : it is the first ever tourbillon on a 1/100th of a second chronograph that can be started and stopped, an audacious timepiece of peerless precision and virtuosic savoir-faire. The first tourbillon chronograph capable of certification-level precision timing, it is by far the fastest, most accurate and most breathtakingly beautiful tourbillon ever imagined. As Jack Heuer stated, “We call it a movement because that is what it does, at the same rhythm, around the clock. A physical force and a machine so complex that it seizes your breath, with as many components — muscles and bones — as a human, and its own beautiful, tireless heart, pumping infinite energy from its impossibly intricate core.” The MikrotourbillonS  has two rotating tourbillon mechanisms visible on its dial face, one for time telling and one for timekeeping. The first beats at 4 hertz (28,800 beats/h) and controls the ISO 3159 compliant watch ; its hand sweeps the dial at a standard tourbillon speed of once a minute. The second, the world’s fastest tourbillon, controls the 1/100th-of-a-second chronograph and is dynamically compensated to run at 50 hertz, meaning it beats at 360,000 beats per hour and rotates at a dizzying five seconds per revolution, or 12 times a minute. Another mind-numbing technical prowess: it has no cage and can be started and stopped thanks to the dual chain architecture. The MikrotourbillonS is built with the same integrated movement with dual chain architecture, conceived by TAG Heuer in 2011 for the Mikrograph 1/100th. Separating the watch chain from the chronograph chain eliminates the risks of the chronograph influencing the watch and vice-versa ; but most importantly, it reduces energy loss and optimizes the precision of the chronograph’s regulating organ. This dual chain architecture allows all “Mikro” timepieces to be ISO 3159 compliant across the board. The Mikrotimer and the Mikrograph are already COSC certified — i.e. with the chronograph function running, a feat virtually impossible to achieve by conventional mono-frequency chronographs.
In 2011, TAG Heuer launched the Mikrotimer Flying 1000, the world’s first 500hz mechanical chronograph. A revolutionary mechanical chronograph regulator without any balance wheel system and equipped with TAG Heuer’s two escapements “Mikro” architecture, the Mikrotimer beats 3.6 million times per hour, making it 125 times faster than a standard Swiss chronograph. Its central chronograph hand completes a full rotation 10 times per second. Stunningly beautiful, with its black Titanium Carbide coated case with contrasting steel horns and the black ruthenium-treated movement inside. The Mikrotimer Flying 1000 was voted the 2011 Swiss Sports Watch of the Year at the Grand Prix de l’Horlogerie de Genève. The victory marked the 7th time in 10 years that TAG Heuer was singled out by the Geneva jury for its engineering and design prowess.
Earlier this year, TAG Heuer made a radical decision : to start from a blank page. The Mikrogirder represents a complete departure from the conventional, 3-centuries-old system, which today still reigns over the mechanical watch industry. Instead of a spiral shape in a classical hairspring, it uses a coupling blade/girder and excitatory blade/girder system working with a linear oscillator. The Mikrogirder system vibrates isochronously at a very small angle, as opposed to a traditional watch, which vibrates at an angle of up to 320 degrees. The result is a significant increase in precision (division of time) and performance (frequency accuracy and stability). The Mikrogirder energy performance will enable TAG Heuer chronographs to attain ultra-high frequencies never before dreamed possible. The statistics are nothing short of astounding : 1,000 Hz = 1/2000th = 5/10,000th of a second = 7,200,000 beats per hour. In comparison, a regular watch functions at 4Hz, or only 28,800 beats per hour. The Mikrogirder is 250 times faster. Ten patents are pending on this breakthrough.

Five years after unveiling the Monaco V4 Concept Watch, the world’s first watch with belt drives, linear mass and ball bearings, TAG Heuer achieved the unbelievable, launching what many industry insiders said would never see the light of day : the MONACO V4 commercially available to watch aficionados and collectors. In a world first (with 2 worldwide patents), TAG Heuer replaced the pinions and wheels of the traditional mechanical movement with a belt-driven transmission : a high-yield relay of five notched micro drive-belts whose tension is controlled by two turnbuckles. The transmission belts in polyether block amide have a 0.07mm section, about the same size as a single human hair, and are 10 times smaller than any belt ever manufactured. Unlike a traditional caliber, this modular synchronous drive belt system requires no extra gears to send motion from one point to another. The Monaco V4 is also the world’s first wristwatch with a linear mass, which is mounted on the world’s smallest ball bearings. The 12g tungsten ingot doesn’t move back and forth but up and down on a track between the 2 pairs of v-shaped barrels in series, set in parallel and inclined at +/- 13°. Its case is made of ruthenium and grade 5 titanium, with fine-brushed silicon nitride “ceramic” inserts. The V4 movement’s avant-garde architecture is visible through the timepiece’s anti-reflective sapphire crystal front and back, showing a completely revisited finishes with a high-resistance black ruthenium coating on the main plate and the Côtes de Genève decorated bridges.
For the Link Lady Diamond Star Haute Couture Concept, the TAG Heuer Science & Engineering team had to work wonders to keep it functional without compromising the star design. Such elegant artistry is possible because the watch is fitted with an oscillating weight that is larger than the movement it graces. It makes a 360° turn between two sapphire crystals which allow the eye to catch and hold each moment of eternity. A complex construction keeps the movement centered in the case and makes it appear as if it is floating. The cut of each sapphire layer within the construction is highly accurate and technical to ensure a perfect fit. The whole structure is completely transparent, a result obtained through a delicate, dust-free assembly process.