A very concrete result of TAG Heuer’s new industrial strategy and recent repositioning, the Carrera Heuer-02T presented at Baselworld this year is the Swiss industry’s only mechanical self-winding COSC-certified tourbillon chronograph retailing for less than 15,000 Swiss francs. For CEO Jean-Claude Biver, “TAG Heuer must offer a perceived value three to five times above the actual price.” A promising leitmotif! This prowess was made possible by the vertical integration of production as well as by new procedures set up right from the start to achieve this goal.While the chronograph is a TAG Heuer specialty, the tourbillon assembled in its workshops by four watchmakers is inspired by that of the Monaco V4, with a titanium and carbon carriage. The 12-part titanium case is also a worthy representative of a new modular generation, leaving plenty of scope for a diverse and free-spirited range of interpretations in terms of both materials and colors. Nobody is liable to remain impervious to the charms of this automatic chronograph with flying tourbillon, also available in a 250-piece Black Phantom limited edition.

A backstage look at the new caliber

Sports timing has always part of the TAG Heuer DNA and its CEO Jean-Claude Biver seems to possess an innate flair for stage-setting. Watching him drive this brand in such dynamic style is bound to fascinate even the most blasé observers, and above all delight both aficionados as well as the ever growing ranks of those who are discovering it thanks to its enhanced global profile. Last year’s vigorous renewal is expressed through a concentrated blend of expertise notably embodied in its cult Carrera line, whose starring role is reinforced in this new episode : new caliber, new case, new construction and new design. This Manufacture chronograph is symbolically named Heuer 01 in tribute to the founder Edouard Heuer, with the 01 referring to the more technical development of Calibre 1887, which is the backbone of the collection. While the 12-part case (see previous article on the Carrera Heuer 02) is an impressive sight in its own right, the show continues with a backstage view of the caliber through the openworked dial. The chronograph mechanism is also revealed, along with the dial-side openworked date disk, while the red column wheel, along with the skeletonized chronograph bridge and black oscillating weight, may be admired through the back. As Jean-Claude Biver explains, “the Carrera Heuer 01 Chronograph symbolizes the continuity of the investments and the creativity of TAG Heuer, which has been in the avant-garde since 1860 and is determined to remain there.”

Charismatic Australian actor and new brand ambassador Chris Hemsworth is clearly impressed by this approach, and has been ever since the filming of the 2013 movie Rush, partnered by TAG Heuer and in which he played the role of F1 racing driver James Hunt.

When watchmaking  and sport become inseparable!

TAG Heuer loves sport, and vice versa. Through a range of partnerhsips, the Swiss brand supports sports events around the world, whether on tarmac or grass.

Since January 1st 2016, TAG Heuer has been the Official Timekeeper, Official Watch and Team Performance Partner of the Formula 1 Red Bull Racing team. The atypical approach to sport and entertainment appealed to the brand, which looks forward to watching the “Red Bull Racing – TAG Heuer RB12” car tear up the tarmac on various racing tracks. The alliance between the two brands will doubtless serve to develop surprising creativity, opening up whole new vistas in F1 sports sponsorship.

On grass playing fields, TAG Heuer chose to sign a partnership with the Bundesliga in August 2015. The famous German national championship with its first and second divisions comprises 36 teams, now ticking to TAG Heuer time. The brand has become the first Official Timekeeper and Official Watch of the Bundesliga for three years. Christian Seifert, CEO of the world’s most powerful football league, said that he and his colleagues were “delighted to have found a partner whose commitment to quality is a perfect fit”. May the match begin!

December 2015 marked the official announcement of the partnership between the watch brand based in La Chaux-de-Fonds and the Patrouile des Glaciers, the international ski mountaineering competition organized every two years by the Swiss army. To mark this event in due style, TAG Heuer has created a watch dedicated to the Patrouille : the TAG Heuer Formula 1 Patrouille des Glaciers Special Edition, issued in a 200-piece special edition. Colonel Max Contesse, Commander of the Patrouille, is thrilled with this partnership and explains that TAG Heuer is “the perfect combination of sports performance and technological innovation.”

As Official Watch of the World Surf League and the Big Wave Tour, TAG Heuer creates a new edition of the Aquaracer for men and women.

The patent for the first water-resistant watch was registered by Edouard Heuer in 1892. In 2003, TAG Heuer picked up this watertightness concept and took it up a notch by creating the Aquaracer collection, designed as a diver’s watch capable of withstanding extreme environmental conditions and remaining water-resistant to a depth of 300 meters. For this new 2016 edition, Aquaracer takes on a more powerful look with a broader 43mm case compared with the previous 41mm. The polished ceramic unidirectional rotating bezel has been revamped to give it a sportier, more distinctive aesthetic. Its twelve-sided shape punctuated by six studs is instantly recognizable – especially along with the luminescent markers on the indices and hands, in conjunction with its screw-down caseback engraved with a diving bell. The seconds hand is polished and tipped with colorful Superluminova®. At the heart of this nautical timepiece beats an accurate and reliable mechanical self-winding movement : Caliber 5. This diver’s watch boasts one of the best quality-price ratios on the market.

In another new release for 2016, TAG Heuer is presenting for the first time an all-ceramic watch, introduced through three new models based on the famous Aquaracer design. Like the men’s model, the Aquaracer Lady 300M is water-resistant to 300 meters. Fitted with a 35mm case, it comes in polished black ceramic and pink gold, diamond-set black or white versions. It is powered by a quartz movement and features the same easily identifiable design as the Aquaracer for men : a unidirectional rotating bezel with 12 facets and six studs to facilitate handling. The rhodiumed or pink gold-plated indices are hand-applied with blue and green luminescent markers ensuring perfect visibility. In its most feminine and chic diamond-set black version, the bezel is adorned with 60 of these sparkling gemstones. Fitted with a black or ceramic bracelet secured by a folding clasp, the Aquaaracer Lady 300M will appeal to women with a penchant for sport and for watchmaking expertise.

40 years young and still on a roll!

Tearing up the tarmac on racing tracks is a field that holds no secrets for TAG Heuer. Alongside the fact that TAG Heuer is in its element here, the brand and motorsports go back a long way. This year, TAG Heuer is reinventing the Heuer Monza chronograph first unveiled 40 years to celebrate Niki Lauda’s first World Championship title, which he won at the wheel of a Ferrari.

Already at that time, this watch model reflected the spirit of motor-racing drivers. For its reinterpreted version, TAG Heuer has maintained this identity that has become embedded in the DNA of this iconic timepiece. Picking up the key functions – the pulsometric and tachymetric scales – in a font identical to the original, the design of the Heuer Monza Chronograph remains restrained and loyal to the Art Deco spirit of 1925. The cushion-shaped case is once more in the spotlight, black like the historical model, with black and white lacquered hands like the initial version. Likewise the vintage orange Superlumionva® hour-markers. The watch bears the Heuer logo to signal its membership of the historical collection, alongside the blue Heuer Monaco and the Vintage Heuer Carrera. All these sports watches pursue the same purpose of making their mark on history.

Now issued in titanium, contrary to the initial steel model, the case of the Heuer Monza Chronograph is thus lighter and more shock-resistant. With its broader 42mm diameter, the timepiece has a more resolutely masculine appearance than the original that was ‘only’ 39mm in diameter. At its heart beats automatic chronograph Caliber 18, powering two chronograph counters at 3 and 9 o’clock that are a further nod to race car design. TAG Heuer – along with its ambassador, the Hollywood actor and experienced racing car driver Patrick Dempsey – are writing a new chapter in the history of a watch brand that is shifting firmly into high gear. 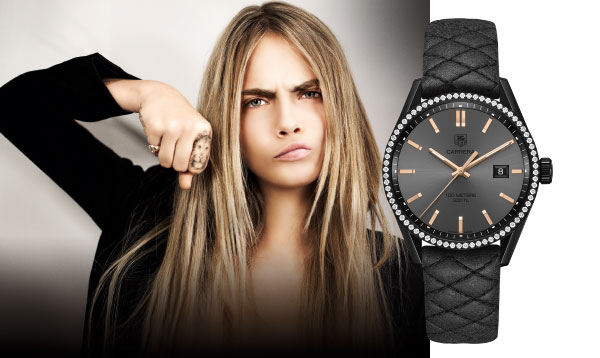