The internationally renowned Indian actress and human rights activist was named an Audemars Piguet ambassador (pictured here on the arm of brand CEO F.H Bennahmias) during Haute Couture Week in Paris last summer, because she deserves it (she is also an ambassador for L’Oréal). While steadily chalking up one success after another on the silver screen (Slumdog Millionaire, Planet of the Apes, Black Gold, Immortals), Freida Pinto also embodies the face of “Because I am a Girl”, an organization protecting young girls against exploitation and misery in the world.

During the gala opening of the Paris National Opera which partnered with the Maison de GRISOGONO for its Opéra collection, the Israeli-American actress, who has starred in films since an early age (including in Luc Besson’s Léon back in 1994) appeared on the arm of brand founder, Fawaz Gruosi, who declared : “There are many similarities between the path followed by a gem, an idea and a ballet dancer. Years to become a jewel, an étoile. Hundreds of hours of work. The result of passion, patience and talent.”

Accompanied by Stephen Urquhart, CEO of Omega, the Oscar-winning actress inaugurated the “Her Time” exhibition last summer at the Triennale di Milano,, illustrating more than a century of Omega’s passion for feminine watchmaking. Famous for her beauty, her passion and her incredible cinematic success, Omega’s Australian ambassador was especially happy to discover this exhibition paying tribute to women given that she considers Italy as a second home.

Base-jumping, snow-boarding and wingsuiting champion, Géraldine Fasnacht has become a Friend of the TAG Heuer brand, whose CEO, Jean-Claude Biver took her under his wing during the International Alpine film festival of Les Diablerets, where she presented her documentary, Cervin : le rêve de la Femme-Oiseau (Matterhorn : The Bird-Woman’s Dream) which retraces her spectacular jump from the peak of Switzerland’s iconic mountain : the Matterhorn (4,478 m high). Anyone for a bit of adrenalin ? 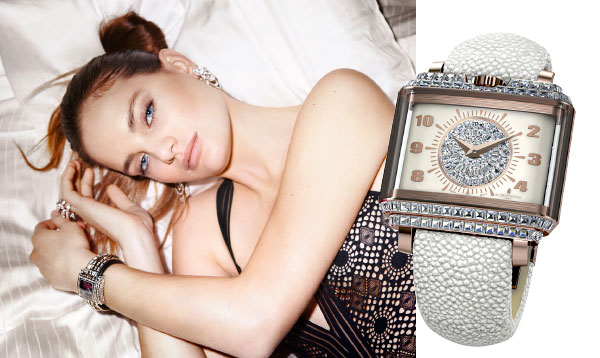