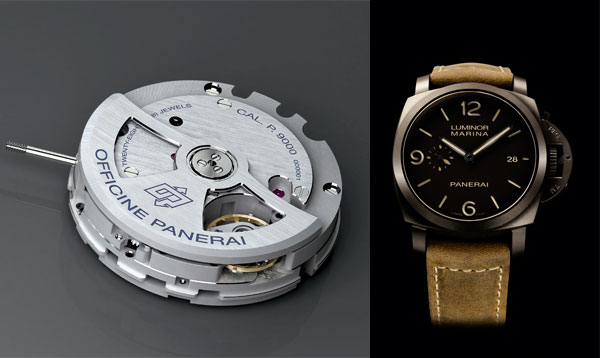 There are no surprises when it comes to the design and the size of this case, a faithful reproduction of 1950s models. It features the characteristic circular dial opening inside a square case, as well as the iconic crown guard and its compression lever. The newest aspect of this model unveiled at the SIHH 2011 lies mainly in the choice of materials used. Whereas a frantic race to get an edge over the competition has led many companies to use unusual materials with varying degrees of credibility and common sense, Panerai introduces this composite case which actually refocuses the brand on its fundamentals in a truly credible way. They’re not giving much away on this material and its production process. According to Panerai, the base of the case is made from aluminium. The “composite” coating is achieved by an electrochemical treatment that apparently transforms the surface into a synthetic ceramic that is far harder than steel. It is easy to see that it was impossible for us to find out more or to test a sample, and yet the very nature of the material and the treatment process itself already provide reliable guarantees of durability. The “sandwich” type superluminova-enhanced dial and hands have long since proven their worth in terms of reliability, luminosity and quality of execution. For this new reference, an exclusive sand-coloured luminova has been specifically chosen to match the colour codes of the model. Whereas one might naturally have feared that this shade would mean a reduction in luminosity, this particular luminova reacts just as well as a C1 type. And finally, the pin buckle also made from a composite deserves a special mention, since the distinctive shape of the pin ensures the highest degree of wristband fastening security I have ever observed.

The calibre powering this model is the P 9000 self-winding in-house made movement. Its construction and finishing are somewhat reminiscent of the large movements produced prior to the 1970s watch industry crisis. Efficiency, functionality and reliability are paramount. Although they are impeccable in themselves, the appearance and finishing of this movement may appear somewhat austere – which is exactly what one expects from a Panerai movement. The design engineers have found a simple yet brilliant means of adding an original finishing touch that ties in harmoniously with the case, by tinting the sapphire crystal on the case-back so as to create a shimmering amber effect playing over the mechanism. The brand could easily have lapsed in terms of consistency by opting for movements too small in light of the generous case sizes. In actual fact, the space available within the cases has been used to the full. By working with large-diameter movements, Panerai guarantees its mechanisms a blend of sturdiness and maximum reliability, along with stable and accurate rating.

The energy delivered from the oscillating weight (with its extremely high inertia) winds up the two barrel springs whichever way it rotates and ensures a total three days of autonomy. As is customary in Panerai watches (stemming from the former use of pocket-watch movements), the hours and minutes appear in the centre, and the small seconds at 9 o’clock.

It is worth noting that when the crown is in its first position, it moves the hours hand forward in one-hour increments, thereby crossing smoothly through various time zones without disturbing the minutes. This design also enables fast date corrections. It had all but disappeared since the 1960s, but the decision to rehabilitate it in a timepiece such as this was a very smart move.

Whether in terms of the functions chosen, the choice of the (three-day) power reserve, the frequency (28,800 vph), or the size, everything has been done in an extremely consistent way, as if Panerai still made a point of honour of complying with the demanding tasks involved in the life of Italian navy officers.

The timing controls confirm these (favourable) initial impressions. At 0 hours, all the amplitudes were measured at 280°C or more. The variations in rate ranging from 0 to +10 seconds/day displayed a 7-second delta and were measured in six positions. After 24 hours in operation, all the rates remained with the range of 0 to +10 seconds/day, and the delta was only exceeded at 9 seconds, whereas the lowest ampltitude reached 269° (in a vertical position)! If on the lookout for something to criticise, one might point out a slight guide-mark flaw. Generally, such a flaw might be due to a slight inaccuracy when pinning up to the collet, but in this case the model had just undergone the most merciless of all resistance tests (an entire week at the SIHH as a star prototype). Since it has very little influence on the overall running, this extremely slight imprecision deserves to be regarded with indulgence.

Performances are therefore on a par with expectations and the option of two barrels housing long springs doubtless contributes to the movement’s impressive regularity. The power reserve indicated by Panerai was proven to be correct, since it is given as three days and was in fact measured as 74 hours.

It’s easy to forget one is even wearing this Luminor model. The brand’s steel and gold models had to be particularly ergonomic so as not to be uncomfortable. This same comfort-oriented ergonomic approach as applied to a “featherweight case” proves extremely convincing.

Certified to a level of 300 meters, water resistance could only be tested down to 10 Atm (meaning 100 metres), but this method was obviously successful and there is no possible doubt about its water resistance to 30 Atm – just as one would expect from a Panerai!

By way of conclusion:

If the Italian Navy still needs to supply its men with the finest possible instruments, this Panerai Luminor definitely fits the bill and will continue to live up to their requirements for many decades to come. The various qualities of this timepiece consolidate Panerai’s coherent attitude and exalt its expertise. The materials and the colour of the case (in keeping with the military watch tradition), its together with its sturdiness, its reliability and its readability make it the absolute and unrivalled benchmark in its field.

One cannot help congratulating Panerai on having succeeded in maintaining its positioning and on maintaining its continous progress. While there many competitors, none seem liable to overtake the Florence-based brand, which clearly has some extremely fine hours ahead of it. 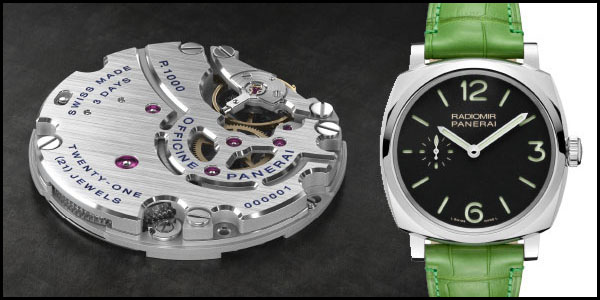 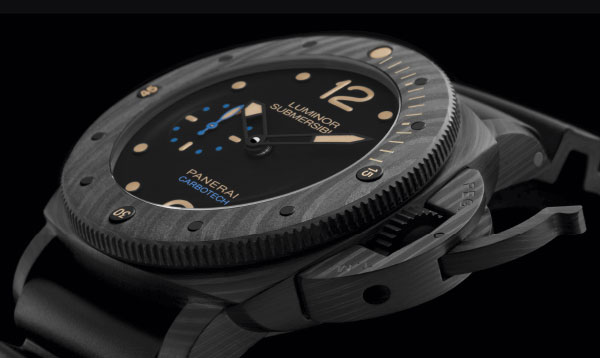