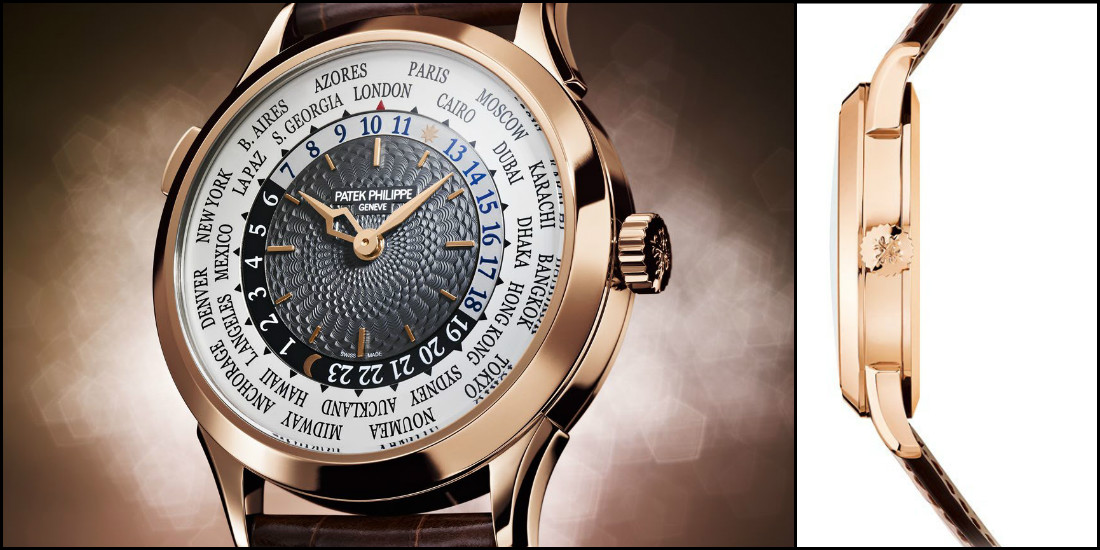 For decades, the Geneva-based brand has served as the gold standard, the ultimate benchmark on the flourishing Fine Watchmaking scene. It is thus with the same undiminished interest that we regularly analyze a Patek Philippe model in this column. For this issue, the watch submitted for us to examine was the Reference 5230, unveiled at last year’s edition of Baselworld.

We should start by saying that, in this particular instance, the term ‘new release’ is a question of subtle nuance. This new world time model is more about mastery of a longstanding tradition than pure innovation, whether in terms of its self-winding movement or the authentic legend forged by the brand’s interpretations of this horological complication.

Collectors and other faithful and longstanding aficionados of the famous Calatrava cross logo will not be disorientated by this 5230, which will spontaneously inspire the sense of absolute confidence that they are accustomed to finding in Patek Philippe.

This model epitomizes the traditional and classical side of watchmaking according to Patek Philippe. Reference 5230 provides a more understated and affordable alternative than the 5131 which has been on the brand catalog for several years. The changes in fact involve only the exterior elements, since the design of the case has been simplified almost to the point of austerity, but will undoubtedly not risk being quickly outdated.

The curves of the case middle have given way to angular profiles as well as a flat case middle and bezel that have made it possible to trim down the diameter by another 1mm to a modest 38.5mm. The enamel dial of the previous model is replaced by a restrained hand-guilloché dial in a noble taupe color, enlivened by the extremely legible 24-hour and city rings. The highly distinctive world time hands of the Geneva brand form an elegantly consistent whole together with the dial and case. In terms of adjustment, the crown guard has been eliminated within the logic of this design, while the rectangular world time corrector appears in its usual place at 10 o’clock.

The development of Caliber 240 HU powering this new reference dates back to 1977, a period when information technology was not yet a part of R&D departments and workshops. Over its 40 years of existence, the movement has naturally been treated to various updates including the Gyromax® balance and the Spiromax® balance spring beloved by Patek Philippe for the past decade, while the components are now machined by cutting-edge equipment. When a caliber finds its way through the decades, it is a sure sign that its performance and reliability are synonymous with elegance. The incorporation of an 22K gold micro-rotor to drive the automatic system is undoubtedly one of the most successful aspects of this movement, enabling it to flaunt remarkable slenderness. When one considers the difficulties involved in developing an efficient micro-rotor, one can but salute the talent of the movement constructors and watchmakers behind the original feasibility study.

The single barrel drives the regulating organ oscillating at 21,600 vph with a minimum declared 48-hour autonomy. World time comes in the form of an additional module exceeding the small diameter of the base caliber. This module also has several years behind it and not much more to prove in terms of functionality and reliability. The caliber naturally bears the “Patek Philippe Seal” in-house certification and is adorned with traditional decoration such as Côtes de Genève, as well as circular-grained and chamfered bridges. One might perhaps regret the bridge contours forming a succession of curves betraying the industrialized nature of the decoration.

Not too many surprises here either. We are well acquainted with this Caliber and its performance is worthy of the finest Patek Philippe years. Another major asset of this caliber relating to its respectable age is that it is known not only for its reliability but also and above all for its ease of maintenance – an insufficiently mentioned yet important argument. In the hands of a qualified watchmaker, Caliber 240 is known for being restored to its initial glory after maintenance and generally performing impeccably thereafter.

The performance of the micro-rotor definitely makes it one of the best – if not THE best – on the market. The timekeeping precision and the power reserve correspond to the standards of the 1970s and to those inherent in the small size of the caliber. Announced as a minimum 48 hours, the power reserve was measured twice at between 48 to 50 hours. The amplitudes were between 265° and 285° at maximum wind. Naturally, the influence of the power reserve on the amplitude and the chronometry is particularly strong in such a model, but the results are still surprising after 24 hours and the measured variations in rate fell within a 7-second range of between -2 and 5 seconds/day. Both legibility and ergonomics are remarkable despite the small diameter of the watch.

Collectors and keen advocates of traditional watchmaking will find in Reference 5230 a pleasingly reassuring watch. And that is precisely what they are looking for, preferring the assurance of tradition to the sometimes whimsical paths sometimes taken by a watch industry that has all too often innovated for purely marketing reasons since the birth of Caliber 240.

It is nonetheless worth noting that this movement was born during the quartz crisis. It is due to this ability to adopt an innovative approach during such tough times that both haute horlogerie in general and Patek Philippe in particular have survived various crises and emerged from them stronger than ever.

One can safely wager that the Patek Philippe R&D department is making the most of the current period of uncertainty to dream up the Caliber 240 of the future, and the prospect already makes us look forward to writing a test bench article on the doubtless promising result.