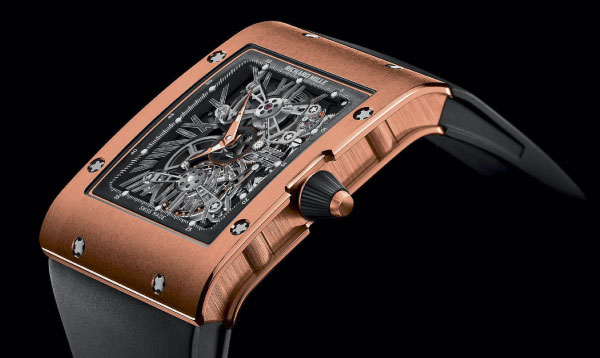 With the RM 017 Ultra Thin Tourbillon from the man who invented 21st century watchmaking, GMT offers you a remake of Back to the Future. While not an all-new model, this iconic reference incorporates a number of characteristic Richard Mille technological innovations and which have since been applied to a number of developments that we owe to the visionary mindset of its R&D department.

The RM 016 had accustomed brand aficionados to a new case shape : a clean-cut, well proportioned rectangular curving along its vertical axis and adopted for the RM 017 featured in this test bench. The pure and almost minimalist lines of this design might easily make one forget the complexity of the construction of this case that alone entailed around 20 stamping operations and many hours of work. Due to its upper surface, a rectangular case always seems larger than a round case of the same size and the RM 017 features fairly imposing dimensions, at 49.5 mm long and 38 mm wide. Although definitely not discreet, the RM 017 is nonetheless a watch well suited to daily wear. In addition to the technical aspects we will look at in more detail, the moderate thickness of the case (8.70 mm) considerably contributes to the overall success of this RM 017. This restrained thickness and the two curves at 12 and 6 o’clock result in an astonishingly ergonomic fit in light of the surface occupied on the wrist. The technical structure of the case is an integral part of its design. The bezel and the back protrude beyond the sides of the case and protect their vertical satin-brushed finish. Long screws pass through two columns on either side that assemble the bezel and back between which the caseback is “sandwiched”, thereby guaranteeing the water resistance of the case as well as consolidating its structure. An impressive strap with a surprising black satin lining stretches its tapered lines between the 38 mm of the case and an ingenious folding clasp secured with a spring-type fastening. Although the movement seems to be suspended alone at the center of the case, a dial covers almost its entire surface. This effect is achieved by a transparent sapphire plate bearing the superluminova-enhanced Arabic numerals. Refined cut-outs on this dial reveal the barrel and tourbillon bridges appearing on the same level, creating a stunning yet almost invisible effect. Exactly the kind of details that nurture authentic Haute Horlogerie. One also notes an attractive and functional cone-shaped crown and splendid delicately beveled dauphine hands.

This is a hand-wound caliber regulated by a pivoted tourbillon. The single barrel feeds the oscillations of the regulating organ at a frequency of 21,600 vibrations per hour, for a full 72 hours. The bridges and plates are made of grade 5 titanium. This choice of material made it possible to skeleton-work the movement without sacrificing the overall rigidity, which is indeed further enhanced by the use of ribbed profiles. The hours and minutes are displayed in the center, while the discreet power-reserve indicator appears at 2 o’clock and the brand’s cherished function selector at 4 o’clock. The most remarkably ingenious features of this caliber are indeed concentrated within the winding and time-setting mechanism. In normal usage with the crown pushed in, nothing particular happens. The winding stem is uncoupled from any winding or time-setting functions. This means no stresses and strains are inflicted on the mechanism by inadvertent handling or impacts on the crown. The crown must therefore be pulled out to the first position for the function selector to switch from N (neutral) to W (wound) and thus enable winding of the watch. In the second position, the selector shifts to “H” (hours set), which enables time-setting. But let’s get back to the “W” winding position. The crown boasts an exceptional grip despite its surprising shape. At the end of the winding operation, in order to avoid overtightening the spring, a progressive recoil barrel pawl limits the torque. A second safety feature then prevents the latter mechanism from having to absorb the surplus energy, and closer examination reveals that the Richard Mille engineers have developed a dynamometric crown. This is a true stroke of genius and shows the full extent of Richard Mille’s innovative role on the watchmaking scene. These are the kinds of ideas that provide authentic solutions to the problems encountered by mechanical horology from its very outset.

So what kind of performances and chronometry (precision timing) can one expect from the watchmaking of the future? In order to reliably measure the impact on the rate of the watch implied by the torque limitation and dynamometric crown, the test procedures were slightly modified. We thus performed measurements of rates and amplitudes after 60 hours of operation in order to appraise the residual rate at the end of winding, as well as after 48 hours of running, along with two measurements at 0 hours. We therefore wound the spring to the maximum until the crown disengaged and then immediately performed a series of measurements. As expected, the results were exceptional and amplitudes were consistently above 290° to 265°, respectively in horizontal and vertical positions, with an average rate of +3 sec/day in horizontal position and +5 sec/day in vertical position. We then conducted a second series of tests after one hour of operation. This enabled us to be sure of having eliminated any possible residual excess tension in the winding mechanism and the barrel spring. The results are stunning! The print-outs show maximum differences of 3° in the amplitudes, while the daily rates are strictly identical ! The contribution of the torque limitation, and especially of the dynamometric crown, should be considered a major innovation in modern watchmaking and should ideally be applied at some stage to all hand-wound movements. In addition to the security-related aspect of the invention that would in itself be sufficient to establish its credibility, this crown also has a remarkable influence on chronometry during the first hours of operation. Finally, the solution displays a mechanical purity worthy of the most illustrious historical watchmakers. After 48 hours of running, the results are still chronometer-worthy, and it was not until 60 hours that the amplitudes and rate quite logically showed a decline, while remaining well within the read-off precision provided by a minutes hand. Finally, the ergonomics of this out-of-this-world model are simply stupendous.

Richard Mille inaugurated an avant-garde style heralding an era that is proving sufficiently long and eventful to make a definitive mark on the history of watchmaking. A watch such as the RM 017 demonstrates the importance of these innovations that should point the way towards progress in the coming decades. If the design of the RM 017 appeals to you and you are not afraid to wear a somewhat showy watch, you will certainly not be taking any risks by acquiring the fruit of such impressive technical accomplishments.