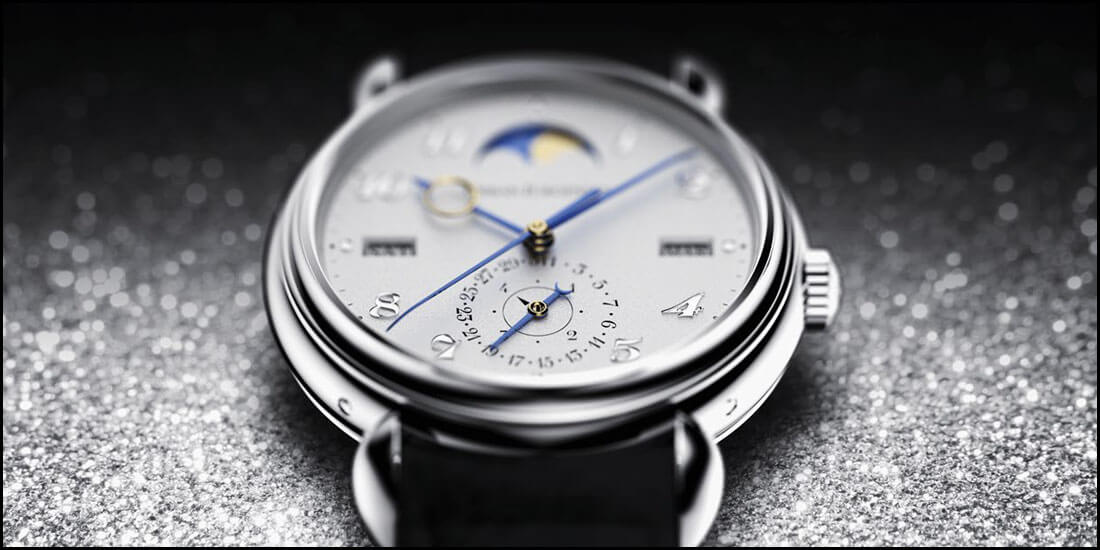 Urban Jürgensen has a fascinating, long, uninterrupted and authentic history. While the brand has changed owners several times in the past decades, neither its development nor its collections have suffered from these changes, and since 2014 it is firmly back in Danish hands that are steering an ideal course. Urban Jürgensen is undoubtedly one of the most important watchmakers of the 18th century and indeed in the entire history of the industry. His works are present in all historical collections alongside models from Leroy and Breguet with whom he studied the trade. Although at the time many countries with an active navy keen to make new conquests were often “horological” nations, Urban Jürgensen took the trouble to become acquainted with other watchmaking schools rather than just that of Denmark. He therefore traveled to Switzerland and France, where he was a student of Breguet, as well as England, where he learned from Arnold. In that period, the French-Swiss school was clearly distinguished from the German or English schools of watchmaking. Jürgensen was clever enough to combine the best of all these currents, as admirably expressed through his watches. So how does this extraordinary heritage translate into contemporary collections ? To find out, we took a close look at the perpetual calendar ref. Reference 1741 PT (PT standing for the platinum version).

Reflecting the privilege of the great names in watchmaking, the clear-cut identity and impeccable craftsmanship of the watch are identifiable at first glance. The platinum case with classic lines features individually soldered teardrop lugs that infuse it with the signature brand style. It measures 41mm in diameter and a substantial 12.74mm thick, although housing a hand-wound movement. These proportions fall within perfectly acceptable norms and the reliability of the movement is doubtless the main beneficiary. The dial is a model of elegance and quality. The perfectly solid silver Grenage dial is adorned with gold Breguet numerals. It is worth pointing out that its legibility is enhanced by the fact that the disk bearing the leap-year-cycle indicator bears the same finishing as the dial. The latter’s smooth fit and “flatness” also give a clear idea of the incredible level of quality lavished on the external elements. More than ever, it is the hands that truly draw and hold the gaze. Their precision-turned pipes (bushes) and the characteristic hole of the gold hours hand literally hypnotize the observer. The steel arms of the hands are rounded-off, polished and thermally blued. If there were a prize for the most beautiful watch hands, Urban Jürgensen would be sure to win it ! 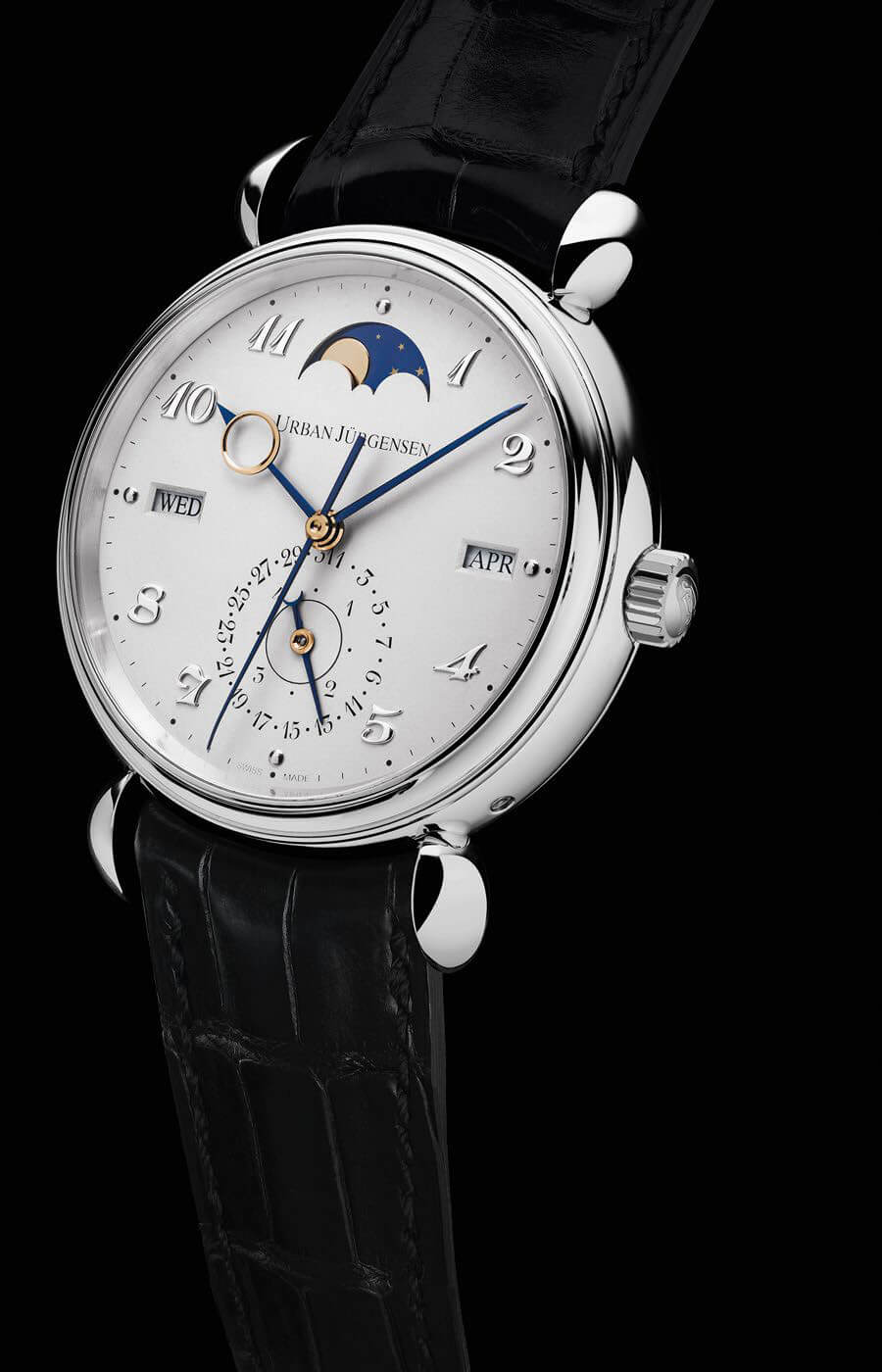 After attempting to take in each subtle detail of the watch face, one naturally wonders what lies behind it. After the necessary suspense, the reality proved more enchanting than even our most enthusiastic imaginings. Three bridges are enough to hold all the wheels and pinions. A barrel bridge, a gear-train bridge and a double-footed balance bridge. They are arranged in a manner reminiscent of the characteristic German construction with its three-quarter plates. Nonetheless, carefully observing the difference between the barrel bridge and the gear-train bridge as well as their shape reveals a more distinctly Swiss inspiration. A single barrel is enough to ensure a 60-hour power reserve for a regulating organ oscillating at at a frequency of 3Hz, meaning 21,000 vph. After making the first detent escapement for wristwatches, Urban Jürgensen now brings us a Swiss lever escapement with a free-sprung flat balance-spring. A single bridge embraces the lever and escape-wheel, thereby saving space without making any concessions. One might perhaps regret a plaque on which such a large surface could have been been given a more appealing decoration than its straight-grained finish. A Côtes de Genève motif fans out from the center of the balance-staff, creating an understated yet sparkling effect. The bar has indeed been set extremely high in terms of finishing, and everything is done in keeping with the finest traditions. The wheels are counter-sunk, the jewel-holes are magnificently olive-cut, while the chamfering of the bridges attains a degree of excellence that only one or two extremely meticulous and well-known independent watchmakers are capable of achieving. Eloquently testifying to the entirely hand-crafted nature of the work performed, the clean-cut edges of the internal angles are of truly exemplary quality.

The instantaneous perpetual calendar consists of an additional module fitted on the P4 in-house caliber, which in this interpretation vividly demonstrates its ability to drive all manner of horological complications.

This entire perpetual calendar model leaves no doubt as to the care lavished on crafting it. Yet perfect architecture and finishing are not the only guarantees of the reliability and timekeeping precision one expects from an Haute Horlogerie creation. Applying our battery of tests gave us a clearer picture.

As mentioned earlier, the hand-wound movement has a 60-hour power reserve. Despite a single barrel, winding time is very reasonable and the gear-reduction of the winding-crown makes it very smooth. Two complete power-reserve cycles were measured : the first lasting 65 hours and the second 62 hours. In the latter instance, the watch stopped at midnight during the date transition, which explains this difference. Three rate and amplitude measurements appear ideal for such a power reserve. They were performed at 0 hours, 24 hours and 48 hours. The results are entirely on a par with the construction, the aesthetic and the finishing of this model, meaning verging on perfection. Not only were the amplitudes very wide, but there is a very small loss of amplitude in the vertical positions (a maximum 23° loss after 48 hours in operation). The same goes for all the rates that remained within a five-second range (across all measurements). The kinematics of the perpetual calendar have been orchestrated in such a way as to ensure the least possible energy consumption.

Beyond 48 hours of operation, the limits of the single barrel make themselves felt, as both timing and amplitude rapidly dwindle. The watchmakers in charge of development have not taken any particular steps to influence the legibility of the perpetual calendar indications, which are arranged in a very traditional manner. Although they appear around the outer rim of the dial, the day and month apertures are traditionally sized. The date is displayed by a pointer sharing the 6 o’clock position with the leap year-cycle indicator. The dial is nonetheless perfectly readable, showing the same appreciable degree of quality seen in the watch exterior as a whole.

Whether in terms of the movement or the exterior, this Reference 1741 gives a sense of being born in the kitchen of a Jura farm, nurtured by the frenetic and obsessive love of a perfectionist watchmaking fundamentalist. It is hard to imagine that such a watch is produced in a series (albeit a small zone). So all in all a flawless achievement for the start of this new era for Urban Jürgensen, whose legendary name has lost nothing of its aura, and whose contemporary creations are entirely worthy of its prestigious hsitory. After wearing this Reference 1741 for a week, one thing became clear : brands such as Urban Jürgensen and those who produce dozens of thousands of units industrially each year are not exercising the same profession… It is up to each individual client to pursue their own vision of Haute Horlogerie.