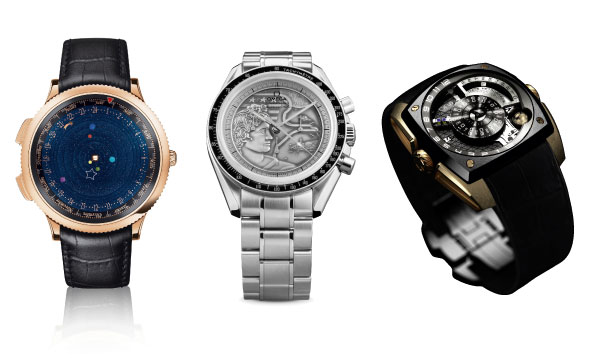 Describing reality and following the natural phenomena that govern our life is watches’ very reason for being. Transcending reality and entering the sphere of fiction is a distinct trend in contemporary watchmaking. In both these respects, intersidereal space is a boon for watchmakers. It nourishes the creativity of the designers and technicians who raise the watch to a new technical or metaphorical dimension.

Close to earth, the moon and its phases have never been depicted in such creative ways. Cartier displays them on request in its Rotonde de Cartier Earth and Moon, featuring a cover placed over the tourbillon and forming an extremely precise crescent moon. Patek Philippe offers a more astronomical take with its Sky Moon Tourbillon. Its back shows sidereal time : the rotation of the heavenly vault as well as the phases and angular movement of the moon. Further out in space, Van Cleef & Arpels launches its Midnight Planétarium, which describes the path of the six planets of our solar system around its star. It was developed in association with watchmaker Kristian Van Der Klaauw, a specialist in astronomical indications who has even dedicated a watch to the orbit of Venus. Meanwhile, Cyrus takes a keen interest in the duration of a day on Mars. The red planet appears in 3D on the dial of the Klepcys Moon, orbiting at its true speed of 24 hours, 37 minutes and 22 seconds.

Some do more than just talk about the moon, they travel there. 45 years after accompanying mankind’s first steps on the moon, Omega is still an official space program supplier. The Speedmaster Professional Moonwatch is regularly issued in limited series dedicated to the Apollo, Gemini or Soyuz missions. Literal interpretation goes even further with Romain Jerome. Its Moon Dust DNA shares something of the space dream in the form of moon-rock dust incorporated into the dial. Meanwhile, Jaquet Droz adorns its Grande Seconde model with a meteorite dial.

Space is not merely about science ; it is also a playground just begging to be diverted. Witness the triple-axis rotation of the Deep Space Tourbillon by Vianney Halter, which is more like that of an orbital station straight out of Star Trek. It is technical, playful and totally in tune with the times. The same goes for the inspiration conveyed by the creative talents at Urwerk. These youthful forty-somethings stem from an era where Japanese cartoons such as Albator made a powerful impression on young minds. Likewise, the oscillating weight of the HM3 by MB&F is inspired by Grendizer’s battle-axe. This generational effect is also visible at Romain Jerome, where the Spacecraft does indeed look like a space vessel that happens to tell the time. Even the font of its retrograde jumping hours evokes Cosmos 1999 or Battlestar Galactica. And doesn’t the De Bethune Dream Watch 5 look like something out of Star Wars ? The infinite and inaccessible nature of space has always inspired designers. It is no coincidence that this is an area where engineers are joined by dreamers. After all, don’t they all tend to have their head in the clouds ?