Corum : Lines featuring greater than ever … 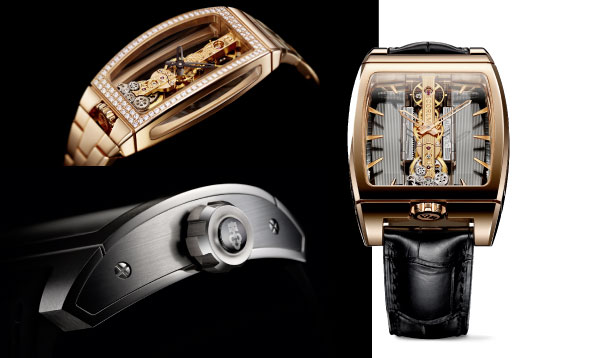 Among the considerable wealth of the Corum collection, two lines featuring original creations offer a delightful immersion into the brand universe. The latest addition to the Bridges collection by Corum, the Ti-Bridge Automatic Dual Winder is in tune with the linear architecture of the previous models in this line with a new Dual Winder system for the automatic CO 207 caliber – designed, developed and patented by Corum – which derives its energy from two interconnected inline oscillating weights. A world first for this avant-garde timepieces. The Corum Dual Winder system features two inline-mounted circular oscillating weights that are interconnected via a transmission arbor that makes them move in parallel. Thanks to three integrated stacked mechanisms at 9 o’clock (a ball bearing device and two unidirectional ball-bearing clutches) made in ceramics and thus requiring no lubrication, the winding is efficient in both directions of the oscillating weights’ rotations. A single barrel placed at 3 o’clock stores up the CO 207 caliber’s 72-hour power reserve.

Loyal to the contemporary aesthetic of the Ti-Bridge line, the new CO 207 movement is held in the center of the case by four titanium cross-bars. The impression of a suspended mechanism is further accentuated by the line’s intrinsic transparency, framed by an anthracite grey dial. The collection’s characteristic tonneau-shaped case has a broad front opening as well as a rectangular rear aperture revealing the caliber.

Entirely in keeping with its cherished pioneering spirit, Corum also presents this year its tonneau-shaped Golden Bridge Automatic. This contemporary watchmaking icon takes a new step towards innovation by offering an unusual interpretation of transparency. Powered by the CO 313 movement with a platinum linear oscillating weight (visible on either side of the case), it is also equipped with a variable-inertia balance ensuring excellent precision. The quintessence of Fine Watchmaking. Housed within an instantly recognizable tonneau-shaped case, it entirely reveals its heart when not worn, while becoming opaque once attached to the wrist – which is thus hidden from sight so as to highlight the magic of an exclusive linear mechanism. The secret of this fascinating orchestration lies in a sapphire dial featuring a metallic striped motif. This ingenious two-part element is fitted behind the caliber at the heart of the tonneau-shaped case featuring four sapphire crystals. This stunningly transparent architecture creates a fascinating play on perspective, in turn concealing or revealing the elements exterior to the watch itself. The hour-markers applied to the sapphire dial catch and hold the light so as to accentuate the overall depth effect, while the openworked hands add an airy touch. At the heart of this captivating world of optical effects lies the exclusive Corum Caliber CO 313. If the legendary baguette movement with linear winding has been fascinating watch enthusiasts for 33 years, its automatic version was launched in 2011.

It all began with an idea, an inspiration : floral, feminine and flamboyant. The artisan innovated by initially fitting the dial upside down on a transparent plate, before meticulously pouring a silver-based alloy over the structure. Diamonds and sapphires play a fascinating musical score, backed by a symphony orchestrated around 1,444 stones

Darrayed in a dazzling cloak of gems, the latest model in the Corum Admiral’s Cup Legend 38 line appears in an exquisitely feminine High Jewelry version, a flamboyant model adorned with 1,444 diamonds and sapphires evoking a floral composition. This genuine work of art is brilliantly enhanced by the virtuosity and technical skill of the artisans exercising two complex jewelry techniques: invisible setting and snow-setting. While many watches feature a gemset dial, Corum takes things to the next level by adorning the bezel, case, oscillating weight, bracelet and buckle of the Legend 38. With its 462 stones of seven different sizes, the dial and its floral motif is embellished with the invisible or “blind” setting method interpreted in an innovative way: the artisan initially fitted the dial upside down on a transparent plate, before meticulously pouring a silver-based alloy over the structure. By seeping into the tiniest gaps between the stones, the matter thereby solidly holds together the 24 baguette-cut purple sapphires, 138 baguette-cut diamonds, 108 baguette-cut pink sapphires and 192 brilliant-cut diamonds. These stones, having thus become a plate, could then be removed from the transparent backing. After a final polishing to eliminate any traced of impurity, this precious plate could at last be fitted on the white gold dial, thereby unleashing the full radiance of the gems beneath which the underlying metal structure has completely vanished. Meanwhile, the white gold case, bracelet, bezel, lugs and crown are studded with 804 brilliant-cut diamond “snowflakes” arranged according to the snow setting technique calling for a wealth of patience and expertise. While only a handful of virtuoso craftsmen are capable of performing such gemsetting work, these impressive skills are matched by the horological excellence within, since this model is driven by a mechanical automatic movement, Caliber 082 – an equally unusual feat for a jewelry watch. Setting the perfect finishing touch to this exceptional watch, the sapphire caseback reveals its most distinctive feature: a white gold oscillating weight entirely set with stones reproducing the floral dial motif. Hand-crafted engravings around the white gold circumference of the caseback further accentuate the inspired refinement of this creation.

As epitomized in the making of the Admiral’s Cup Legend 38, Corum has developed unique gemsetting techniques that illuminate its finest watchmaking creations. These methods, which are exercising a steadily growing appeal on designers and on an audience sensitive to new forms of expression in this domain, admirably demonstrate the brand’s undeniable jewelry-making expertise.