The classical arts – architecture, sculpture, painting, music, poetry and dance – endlessly inspire watchmakers, whose expertise is now acknowledged as an art in its own right, the 12th Art. This year’s edition of the SIHH provided many notable examples.

The imposing Planetarium adopts a cosmic architecture in presenting – alongside the hours and minutes display – three cleverly crafted complications. The in-house tri-axial tourbillon, developed in 2014, performs its rotations in a lyre-shaped carriage, beneath a sapphire crystal dome. A second dome tops a globe motif miniature painted according to a depiction of the world in 1791, when the brand was founded. It turns in 24 hours, indicating on the dial side the zones where it is daytime, and on the back those where it is night-time. The third member of this trio is a high-precision moon phase based on 17th century cartography, after the invention of telescopes. The case provides a side view of the movement, while the back reveals a blackened mainplate enhanced by the emblematic Girard-Perregaux gold bridges.

To adorn the new Altiplano Double Jeu, a creation composed of two superimposed cases, Piaget has called upon Sara Bran and the brand new artistic craft she has invented : gold lacework. The artist uses the manual drilling technique with a tiny hacksaw to create lace motifs sculpted like the finest fabrics. To achieve this, she draws using a compass and dividers, drills with various drill bits and cuts out using saw blades. The upper module of the Altiplano Double Jeu Gold Lacework features a radiating decor lit up with marquise-cut diamonds. Pressing the dedicated pusher raises the cover to reveal a a full view of a deliberately minimalist dial, immaculate white like the matching alligator leather strap.

In the Cartier collection, flamed gold has joined the repertoire of artistic crafts exercised in watchmaking. The gold dial is adorned with a painting that is flame-colored at various temperatures. Working from the lowest to the highest serves to create beige, various tawny shades and then blue, it takes a great deal of meticulous care to master colors that evolve with each firing. The in-house artisans meticulously create a strikingly natural panther’s head, graced with the luminosity of enamel and the precision of miniature painting. It adorns a generously sized Ronde Louis Cartier XL watch set with diamonds on the bezel, crown and folding clasp. 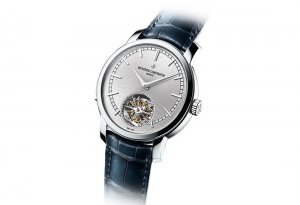 The Traditionnelle collection by Vacheron Constantin welcomes a new in-house movement combining a tourbillon – featuring an emblematic carriage shaped like a Maltese cross and a spring-bar requiring 11 hours of polishing – with a minute repeater that chimes the hours, quarters and minutes on demand. The “Music of Time” resonator delivered with the watch serves to amplify the sounds produced by the perfectly adjusted gongs. This Traditionnelle in platinum or in pink gold – the latter version being reserved for the brand boutiques – is distinguished by an exclusive guilloché motif hand-crafted on the dials. It also features the original characteristic of displaying the power reserve on the back, by means of a blackened gold hand.

With the Academia Out of Time, DeWitt confronts real time and virtual time in a poetic manner. The first is represented by a dead-beat seconds hand serving both as a regulator and a seconds indicator in the right-hand counter ; while the second takes the form of an in-house invention : a free seconds hand flying endlessly around the left-hand counter. The latest model, Academia Out of Time Sparkling – housed in a new-generation case with Imperial columns – features a new hand-crafted dial from the in-house ateliers. Its warm sparkle is created by specks of gold embedded in the chocolate brown lacquer.

Van Cleef & Arpels sends a butterfly dancing through Nature EnchantéeTM collection with its Lady Arpels Butterfly Automate. While the hours and minutes sweep by on a small offset dial, the butterfly flutters its wings at random intervals, and one or four times in a row according to the power reserve. The occurs every two to four minutes when the watch is off the wrist, and more often when it is worn. The show can also be performed on demand by pressing a pusher and is all the more delightful in that it takes place amid a stunning three-dimensional decor crafted by the in-house artisans. Among other subtle details, the curving plique-à-jour enamel leaves were created using a new technique specially developed for the occasion.