Patek Philippe : Between traditions and the here and now 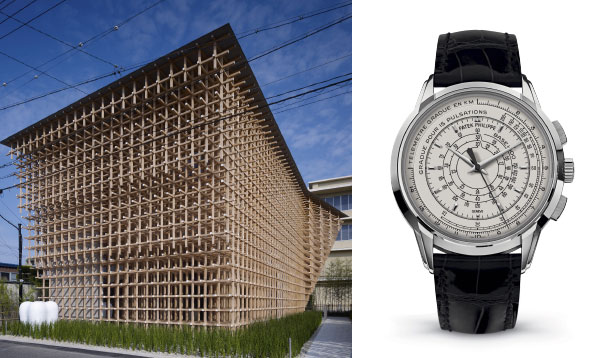 The structure is based on the principle of Cidori, an ancient toy composed of small wooden sticks of the same size.

Before it even emerged from the workshops of the Manufacture, the Multi-Scale Chronograph 5975 was already a legend. Why so ? Simply because this watch is part of a series of timepieces unveiled by Patek Philippe on the occasion of its 175th anniversary. The reputation of the Geneva-based firm would have sufficed to stir avid enthusiasm among collectors. But apart from its inherently prestigious nature, this chronograph turns out to be entirely on a par with the expectations nurtured by aficionados of exceptional horology. This chronograph pays tribute to the watchmaking heritage by offering a set of logarithmic scales such as one used to find on professional watches until the 1960s. The three concentric scales – tachymeter, telemeter and pulsimeter – serve to measure speeds, distances and heartbeat. These high-precision measurements are powered by a brand-new version of the CH 28-520 caliber, specially developed for this model. So as to set this technical feat off to its best advantage, the Multi-Scale Chronograph features an understated and elegant aesthetic. It comes in three limited editions of 400 each – in yellow, white and pink gold – as well as a 100-piece limited edition in platinum.

The GC Prostho Museum Research Center was designed by Kengo Kuma, a Japanese architect who has made his mark on the history of his art through his innovative manner of conceiving and creating modern architecture. Right from the start of his career, he has attempted to revive traditional Japanese architecture so as to reinterpret its values and its spirit. Nature has always played a central role in his unique and striking vision.

The structure of this project is based on a system called Cidori, an ancient Japanese toy created in the small town of Takayama. Cidori is a set of small wooden sticks of the same size assembled via unusually shaped joints. Transposed into architectural terms, this system serves to create shapes without needing to use metallic elements. This technique has indeed also been used inside the building as well as to design the furniture.

The link between the museum and the watch lies in the way in which each of these two exceptional creations works with history. On the one hand, the architect’s decision to shed new light on the Cidori system; and the other, Patek Philippe’s reinterpretation of the chronograph. Both convey a wish to enhance works of art using historical techniques and unique expertise. The watch and museum have in common their role as emissaries of tradition  in the modern world.

Creative momentum is doubtless the link between these two works that are distinguished by their uniqueness and by the feelings they inevitably stir.