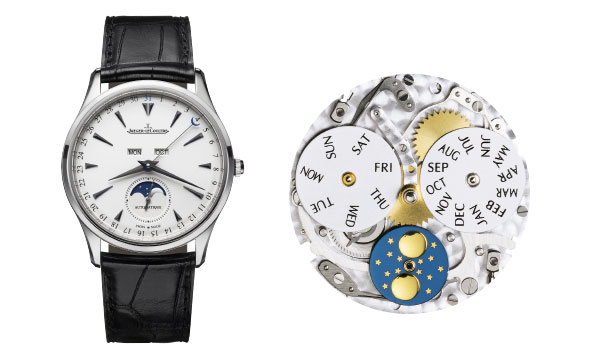 Let’s make one thing absolutely clear from the start : the object of this test bench will not win a 2015 prize for innovation, but rather for reliability and consistency. It thereby subtly affirms two major factors in the success of Jaeger-LeCoultre. Firstly, the clarity of a catalogue built around the Atmos, the Reverso and the master collection. The first two were born at the dawn of the 1930s. While the one thousand hours of testing characterizing the Master collection were only introduced in 1992, this line sums up the best of what the Manufacture in Le Sentier developed in the field of men’s watches between the 1930s and the 1960s – such as the Memovox, to mention only one illustrious example. These three pillars have constantly evolved and adapted, while becoming ever more accurate and reliable. Secondly, the 1000 Hours test is 23 years old and the pervasive presence of Caliber 889 and its variations testifies to the rigorous nature as well as to the value of both the test itself and this legendary movement.

Jaeger-LeCoultre is currently doubtless one of the few Manufactures to be developing innovative Grande Complication models and to have been engaged for almost a century in the constant and dynamic evolution of its three flagship assets. A long-term strategy that is proving its worth in a period when some are finding that revolutionary tends to spell ephemeral.

The object of this test bench, the Master Ultra Thin Calendar, is a perfect reflection of this philosophy that has become atypical.

The fact that this model belongs to the Master Control 1000 Hours collection is immediately obvious, since the case has established itself as a timeless pillar with a distinctive identity. The constructors in Le Sentier have of course succeeded in keeping this case alive and well for more than 20 years and they have on several occasions already been required to adjust the proportions according to the movement or the complications it must house. Such modifications are in themselves a demanding exercise that is clearly well mastered. Whereas this caliber (and thus its functions) already appeared in the collection under the name Master Moon in 1995, in this particular model, the title Ultra Thin had to be justified. While the movement has remained unchanged since its appearance in the collection exactly 20 years ago, the challenge of slimming the watch down was thus focused on the exterior. Firstly, the dial was made on a flat base, whereas it used to be slightly cambered. The volume of the small seconds and the moonphase indicator at 6 o’clock has been kept to an absolute minimum. The dial itself has been given a splendid silver-toned opaline finish, while the hands and hour-markers reflect the design codes of the collection. While the case is the same diameter as its predecessor (39 mm), it is significantly slimmer at 9.90 mm. A flat sapphire-crystal caseback provides a chance to admire the magnificent automatic caliber driving the model and also saves another few tenths of a millimeter. Alongside the revisited proportions and despite an overall unchanged diameter, the opening of the watch glass has been slightly increased to give the impression of a larger diameter, and thus, by a simple play on proportions, create the illusion of an even slimmer case.

Caliber 891/2-448 drives this Ultra Thin Master Calendar. A reference regrouping the third evolution of Caliber 889 (launched in the 1970s) and its triple date module (date, day, month and moonphase), while offsetting the seconds to 6 o’clock. The centerings (known as pointages) for this caliber betray a construction from another era. The centering of the moon and small seconds, along with the very central position of the day and month apertures, correspond to an era when a 39 mm case was intended for “large-diameter” sports watches. Nonetheless, this legendary caliber (formerly used in many other watches from prestigious manufacturers) is quite simply one of the best to date in terms of both chronometry and reliability.

The modest dimensions correspond to the norms of the time, with a standard 11 ½’’’ diameter. Despite efficient bidirectional automatic winding, the thickness (5.53 mm) is incredibly small for such high-quality rating. The automatic system with its exceptional efficiency is probably one of the best on the market. Finally, the construction and finishes are impeccable and entirely on a par with current standards.

The triple calendar is driven by an additional module. Apart from offsetting the stem within the overall movement thickness, the option of a module enables the widespread use of a movement offering a rare degree of guaranteed reliability. The finishes of the module match those of the movement and contribute to its smooth functional and aesthetic integration.

The base of this caliber oscillating at 28,800 vph is thus well known and recognized among devotees of haute horlogerie. Its long history and its omnipresence in the collection with 1000 Hours of testing are powerful testimony to its efficiency. There is no surprise in terms of rates. Measurements were taken at 0H and then at 24H. At 0H, the amplitudes were respectively more than 280° and more than 260° in the horizontal and vertical positions. After 24 hours of running, they had dropped to values superior to 260° and 245° – far better than one would expect from a standard vintage movement with only 38 hours of power reserve. One should also note the excellent efficiency of the module which does not demand an excessive amount of energy, since the power reserve is not diminished despite the force required to drive the triple calendar. In order to reduce the power consumption, the driving of the moon disk is in fact offset from the rest of the calendar – a simple yet effective trick. In terms of adjustments, the crown provides a good grip for both winding and time-setting. To adjust the calendar, four correctors independently controlling each of the four calendar indications ensure enhanced user friendliness.

Given the dimensions of the caliber and the centering of the arbors, one might well consider that the Master Calendar has “become” Ultra Thin only because the definition of ultra-thin is not the same as it was 40 years ago. An effort has nonetheless clearly been made to reduce its bulk and in particular its thickness. Finally, this tried and tested reliability and quality of execution, in terms of both construction and chronometry, demonstrates the significance of the decision to create a timeless line evolving around calibers that have amply proven their worth. A significance that is indeed starting to inspire other brands…

In a nutshell, if you are looking for a timeless, classic watch of exemplary reliability, the Master Collection in general and the Ultra Thin Calendar in particular deserve to be right up there at the top of your list.