The fourth auction by Phillips, Bacs & Russo offers collectors an array of 196 watches in Geneva on November 12th and 13th 2016.

Having established itself in just three sales as the global market leader in watch auctions, the association between Phillips and Bacs & Russo dreamed up by Aurel Bacs and his wife Livia has proved that today’s high-flying collectors strongly favor quality over quantity. Loyal to this successful formula, Aurel Bacs’ team will be offering less than 200 exceptional watches this fall, headlined by top lots symbolizing the ultimate in collectible timepieces, and notably featuring an unprecedented triad of metals interpreting the legendary Patek Philippe reference 1518. Prior to the auction, the international tour undertaken by this selection of extremely rare vintage watches featured Hong Kong from October 1st to 5th, followed by New York (October 13th to 17th) and London (October 22nd to 24th).

With estimates ranging from a few thousand to several million Swiss francs, numerous devotees of collector’s watches will be seeking to outbid each other – and get Aurel Bacs to bring down the hammer in their favor – for each of the 88 Rolex and 35 Patek Philippe models, as well as around a hundred others from 15 or so different brands, some of them bearing a double signature. 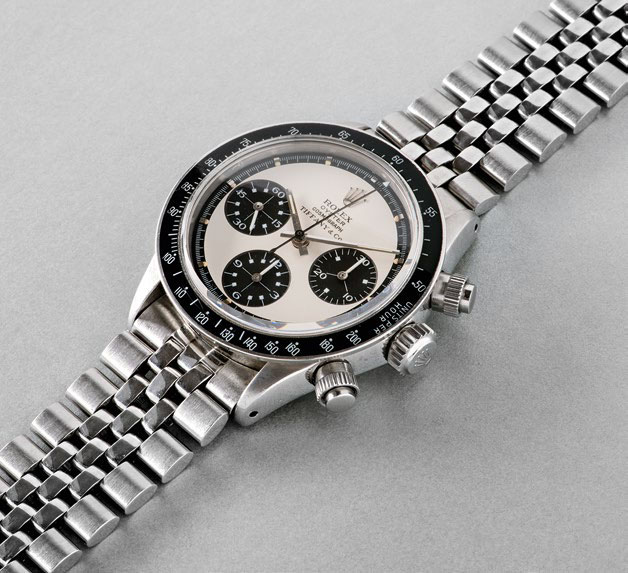 Although 1518 does not correspond to a milestone in human history, it does on the other hand symbolize a cult reference among informed connoisseurs. First launched by Patek Philippe in 1941, reference 1518 ushered the House into a whole new era, since this perpetual calendar was the first to be series-produced. Less than 300 units were made, most of them in yellow gold and around 40 in pink gold, while the stainless steel version is incredibly rare, with only four known examples. This is the first time in his entire career that Aurel Bacs is enjoying the privilege of offering one in a public auction. As the icing on the cake, this 1943 model also bears the number 1. Estimated at between CHF3,000,000 – 7,000,000 joined by a 1518 in yellow gold and another in pink gold. The latter’s estimation ranges from CHF600,000 to double that figure and boasts a famous provenance, since it belonged to H.H. Windsor Junior, whose father founded the Popular Mechanics magazine at the start of the 20th century. Among the other highly distinctive Patek Philippe watches set to be featured in the Phillips sale is a 1940s stainless steel reference 565 with black dial nicknamed “The Night Watchman”. Gifted to an individual who served Patek Philippe in this capacity, as a token of recognition for his loyalty and dedication, it is distinguished by luminescent hands and numerals that facilitated reading through the guard’s night shifts, and is the only known example of its time. The estimate for this unique piece is CHF200,000 to 400,000. 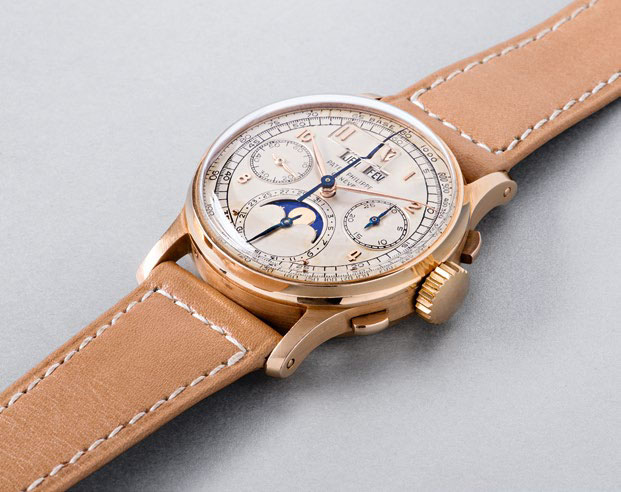 While upper estimates for several Rolex watches in this auction are near the half-million franc mark, reference 6085 featuring a cloisonné enamel dial depicting a dragon hits six figures. To date, only five Rolex watches worldwide are known to be adorned with a dragon on the original dial, each housed in a different reference – thereby making this model quite probably unique. The splendid dial of this 1951 “Dragon” also reflects remarkable craftsmanship. And after the dragon’s claws, on to the thorns of the “Perfect Rose”, the nickname of this pink gold reference 3330 from the 1940s. Its extraordinarily pristine condition gives the impression that it has never been worn and the estimate ranges from CHF300,000 to 600,000. The same state of preservation and the same figures apply to reference 6538 in this sale, a 1950s “James Bond” Submariner that is even rarer because of the four lines of text on the dial. Its estimate is a record for this reference.

Fans of double signatures will be won over by the three Rolex models whose dials bear the name of the prestigious American retailer Tiffany & Co, including a Cosmograph Daytona “Panda Paul Newman” (reference 6263) estimated at between CHF250,000 and 500,000 ; and doubtless also by the similarly estimated Cosmograph Daytona “Linz Paul Newman”, named after the Texan “Linz” retailer that was at the time one of a handful of its counterparts authorized to place their name on the dial of the major brands. Meanwhile, less wealthy collectors of vintage Rolex models will be reassured to know that there are some more affordable models, such as the Rolex GMT Master in yellow gold for which bidding starts at CHF25,000 ; as well as the stainless steel GMT Master gifted by F1 world champion Jackie Stewart to automobile engineer Derek Gardner in the 1970s, estimated at between CHF8,000 and 12,000. 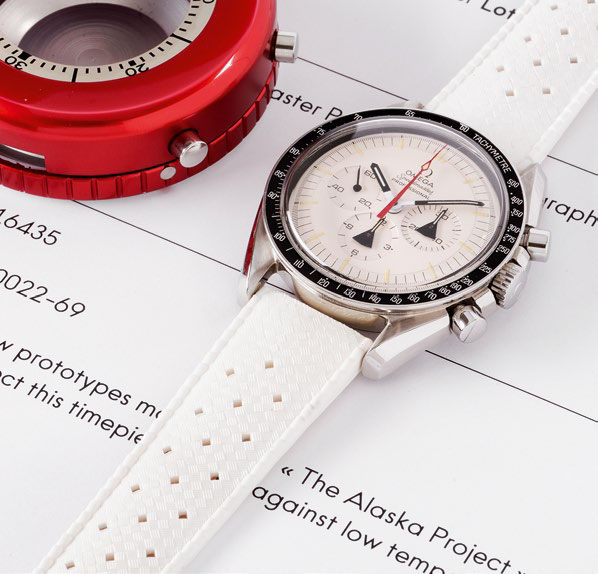 Remaining in the automobile field, this Breguet Type XX was formerly the property of Sir Jack Brabham, triple world champion of Formula 1 racing, and notably famed for being the only driver to win a championship in a car that he himself built. The caseback engraving reads “Esso J.B. Champion du Monde 1959” and this stainless steel chronograph is estimated at between CHF20,000 and 40,000. Among the Omega Speedmaster models up for auction in this sale, the “Alaska II” prototype is one of the three known examples with a heat-resistant aluminum red case. Before the Apollo II mission, the top-secret “Alaska” project had involved Omega in the quest for the perfect space watch. The Omega Museum owns one example and the other belongs to a prominent private collection : who will treat themselves to the last available Speedmaster Professional Alaska II expected to fetch between CHF100,000 and 200,000 Carrying a similar estimate, three Panerai watches listed in the new ‘bible’ devoted to the Italian brand – Vintage Panerai-The References by Ralf Ehlers and Volker Wiegmann – are liable to thrill aficionados : the Panerai 3646D, Panerai 6152, and especially the 6154 “Egiziano Piccolo” that was already auctioned for US$320,000 in 2012. This example comes equipped with an original strap and an underwater torch. Enough to set fire to Lake Geneva in mid-November ?