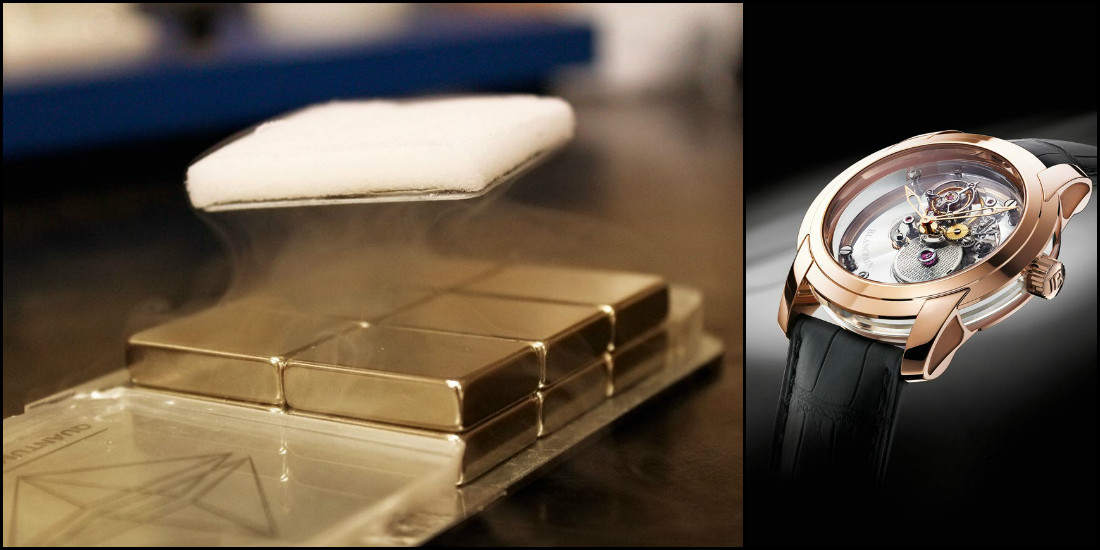 Like all good sleights of hand, the illusion is both perfect and intriguing. A movement floats in the middle of a watch case that is generously transparent so as to heighten the sense of mystery. Magic is generally about tricks, cables, professional deftness, whether in watchmaking or on stage. Conjurers capable of these incredible tricks devote their technical and sometimes historical expertise to making their mechanisms appear to levitate.

Magicians use secret panels, trap doors and diversions to muddle spectators’ senses. The watchmaker’s basic material in this domain is sapphire. Not the blue or pink gemstone used in jewelry, but rather a perfectly transparent man-made form of sapphire. Generally used to make scratch-resistant watch glasses, it has found its way into watches as a mainplate, as bridges – meaning a virtually invisible structure playing the same role as steel or brass. Blancpain used it to create the chassis of its L-Evolution Flying Sapphire Carrousel, but renounced total transparency by metallizing the watch glass in order to enhance legibility. While Corum went a step further with its Panoramic Tourbillon fitted with an invisible mainplate and bridges, they were still distinguishable because they were juxtaposed. It was not until the historical specialist of this illusion reentered the scene that the magic truly worked its spell.

This providential Houdini is of course Cartier. In the 1920s, the brand had introduced the “mystery” clocks whose hands appeared to be floating in thin air. They were in fact perched on rock crystal rings guided by a mechanism hidden in the body of these clocks. Cartier revived this concept in 2013. Now adapted to the wristwatch format, the intensity of the illusion has been heightened ever since. The latest model is called Rotonde de Cartier Astromystérieux. Its entire movement appears to be placed between two layers of air, at the very heart of the watch. Even those in the know still scratch their heads and wonder how it really works. A fakir’s favorite piece of equipment is a wire, a principle that inspired Richard Mille. While the main purpose of the RM 27-01 was to achieve extreme lightness and shock-resistance, it has also explored a whole new avenue. Its movement is secured to the case by a set of cables (just 0.35mm in diameter), pulleys and tensioners. Merely hiding them would have been enough to make the caliber seem to float.

There is another method that is apparently simple, yet difficult to implement : it involves giving pride of place to emptiness and calls for movements with distinctive structures. The baguettetype caliber of Corum’s Golden Bridge models is so narrow that it can be held to either end of the case, within which it looks amazingly free. The alternative is an ultra-skeletonized movement, such as that of the Tourbillon Volant Poinçon de Genève by Louis Vuitton. The structure of the caliber is slender and concealed beneath a dial and a tourbillon. The floating effect is achieved by clever means that are traditional yet mesmerizing.