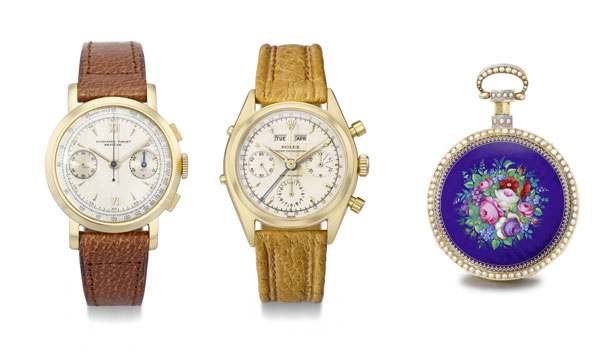 On the program of this traditional appointment are not surprisingly Patek Philippe and Rolex selections, as well as a small series of old Audemars Piguet watches, modern watches, and pocket watches including a rare item from a royal collection.

From now until the event on May 14 at the Hôtel de Bergues, Christie’s watch expert will certainly have enriched its 2012 vintage with extra lots, but Aurel Bacs and his team emphasise a known trend : namely that the gap between equivalent pieces is widening in terms of their condition. Purchasers appear ready to fight over a model whose quality is irreproachable, but are not interested in this same watch if it has a few imperfections. Under the verdict of the auctioneer’s hammer, this difference in quality can have the effect of multiplying the price by nine, as two vendors of the same reference found out last winter. In other words, while the sale this spring has fewer pieces in it than it has in the past, it may be that the average price turns out to be higher. Another trend noted by Nathalie Monbaron at Christie’s is that the value of enamelled watches has increased.

Let’s start with three flagship Patek Philippe lots, all from private collections. Who can boast that they have already admired a Reference 1518 in pink gold with a pink dial? Only eight or nine examples of this have been created in the past, and the exceptional condition of this rare piece makes it worth between CHF 500,000 – CHF 800,000. Even better, the 1956 (first series) Reference 2499 in pink gold is being offered by the family of the original owner. It has never been shown in public and only five other examples in pink gold are known to exist, in two variations – one with a flat caseback and elongated lugs, of which four examples were produced, and the other with a curved caseback and short lugs, of which only two examples were produced, including one that is valued at between CHF 1.2 and CHF 1.8 million francs. Finally, the highest step on the podium is occupied by Reference 2523 World Time in yellow gold with a cloisonné dial depicting North and Central America and dates from 1955. Fans of the cult brand might have recognized a protagonist of The Art of Patek Philippe sale in 1989, in which it went for CHF 260,000 at the time, but which is now estimated to be worth ten times that amount.

Any self-respecting auction includes a raft of Rolex, the best-known watch brand in the world, and ultimate symbol of success. The selection available at the Christie’s sale is relatively classical, with the exception of an unusual 1952 Reference 6036 in yellow gold and with a silver dial. The absolutely magnificent state of this “Jean-Claude Killy” makes it estimated to be worth between CHF 150,000 and CHF 250,000. Far rarer at auctions, Aurel Bacs has assembled a little selection of historical Audemars Piguet models which should produce interesting results. As has become the norm, a few dozen modern watches from a large number of brands, including Patek Philippe, will be added at prices with or without a reserve. The estimate for its Reference 3974, a perpetual calendar with minute repeater, offered in its complete state and in its original condition, has doubled (in other words, CHF 400,000).

Finally, lovers of pocket watches will not have much to choose from at this sale which will only offer a few examples, of which some enamelled pieces and some made for the Chinese market, but the biggest collectors will undoubtedly get involved in spectacular fights for a unique piece that has emerged from a treasure casket. Initially offered to the Tsar of Russia by its creator, Leon Kuchujewsky, and then to Baron Humboldt, this 1814 silver pocket watch features an astronomical world-time display. The price of this is between CHF 100,000 and CHF 150,000. Will its future owner also succumb to the charm of another completely different kind of pocket watch that is the focus of our Test Bench article ?