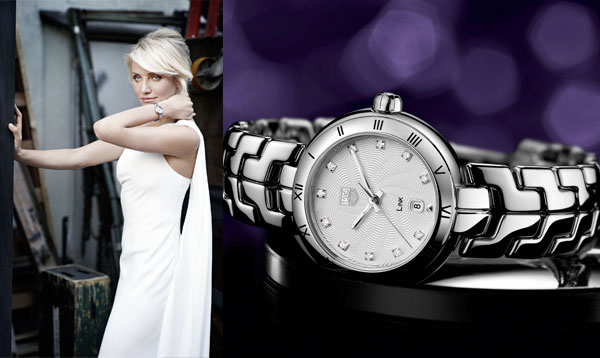 The filmography of Cameron Diaz is a fairytale come true for any aspiring film star : appearing in an average of two films per year since 1994, she alternates between comedies and action films, regularly co-starring with legendary actors such as Tom Cruise, Leonardo di Caprio (both also TAG Heuer ambassadors), as well as Robert de Niro, John Malkovitch, John Cusack, Jude Law and Justin Timberlake. Her radiant style has earned her tailor-made roles in box office mega-hits such as There’s Something About Mary and Charlie’s Angels. The vivacious and seductive Californian former fashion model is also skilled in handling humour and self-derision. This endearing rebel of the 7th art is celebrating her 40th birthday in 2012, and was a natural choice for TAG Heuer (see also the Jean-Christophe Babin interview on the previous pages) as the muse of its new Link Lady collection, which she wanted to be “feminine, sparkling, and easy to wear”.
<
>