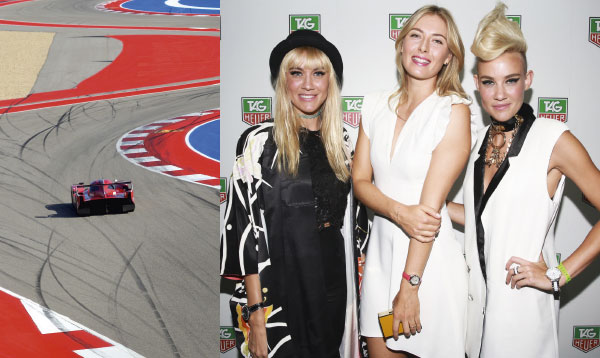 They live at full speed. In life, real life, and on social networks. We see them on Facebook and Instagram. One discovers them through quick tweets in which they say what they have to say in 160 characters. Art, fashion, music, work, evenings, loves, school, music, politicians, celebrities…  All and nothing at the same time, deep thoughts and trivial anecdotes which reveal this unique generation of 18-35 years olds.

Through its slogan “Don’t Crack Under Pressure” broadcast on the web since last summer, TAG Heuer has made a massive investment in social networks to become part of the collective landscape of this youth. While sport and its star ambassadors remain the spearhead of the TAG Heuer spirit, the art, music and fashion represented by personalities such as Cara Delevingne, David Guetta and the Nervo sisters stunningly highlight the disruptive strategy of the watchmaking company. Anti-conformism, surpassing oneself, boldness… TAG Heuer roots its image in the Millennial generation. Both in the real world and in its virtual counterpart.

Carrera keeps an eye in the rear-view mirror

The icon inspired by the legendary and perilous Carrera Panamericana race reinvents itself with two new models featuring a vintage sporty look.

It’s a watch that keeps track with the times. No more, no less. Just the right dose of tradition, and the perfect amount of modernity. An ideal blend of heritage and innovation that puts Carrera firmly in tune with its era… or rather with each era. Created in 1963 by Jack Heuer, the original Carrera is returning for another victory lap with a deliberately proclaimed vintage style. The COSC-certified Carrera Calibre 6 is doubtless the most loyal to the faithful to the original design with its blue and silver colors matched with red accents on the logo and third hand, along with a blue small seconds subdial and a perforated strap. This retro-trendy look is a perfect match for this chronograph equipped with TAG Heuer’s Calibre 6 movement and featuring a 39 mm diameter perfectly suited to both men’s and women’s wrists. Radiating a look akin to that of the historical model, the Carrera Calibre 18 also comes in a 39 mm version, which in addition to its two resolutely 1960s-style counters, date display and perforated leather strap, also features a telemetric scale on the inner bezel ring. Elegance, refinement and power meet and mingle in these two models that bring history to life in the here and now.

Extreme, sculptural, uncompromising… The Monaco V4 Phantom bears little relation to the Monaco watch that shot to fame in 1971 on the wrist of Steve McQueen in the film Le Mans. Its sophisticated matt black case is made of CMC (Carbon Matrix Composite), along with the seven bridges of its movements to which a distinctive technique has been applied in order to achieve a regularly and particularly elegant “matt black vertical-brushed” finish. In much the same spirit, the dial features subtle shades of dark gray or black. Only the glimmer of the movement jewels creates a discreet contrast with the total-black look. The mechanics also overturn watchmaking fundamentals, since this avant-garde model highlights the characteristics revealed in 2004 in the first Monaco V4 with its now famous transmission belt and its linear winding weight sliding along a straight rail.

Top model Cara Delevingne is TAG Heuer’s new ambassador. Feline and rebellious, the enfant terrible of fashion turns the codes of luxury and beauty upside down. Watch out for a free spirit!

Cara Delevingne and TAG Heuer ? Nothing could be more obvious. Altogether logical, perfectly coherent, and yet another nose thumb at convention by two rebels at the pinnacle of their daring. Because what other character in the world of fashion would have been just as good at, or better than Cara Delvingne, at embodying the image of TAG Heuer ? Poles apart from rigid traditional beauties, Cara does not look anything like a good girl. She pulls faces as much as she is seductive, she alternates between stilettos and sneakers without batting an eyelid, and moves effortlessly from the red carpet to the skate-park. A fiery temperament in a perfect face that has been drawn to the inventiveness, the daring, the passion and the values of TAG Heuer.

Welcomed to the TAG Heuer family at a ceremony organized at the Beaux-Arts in Paris, two days from the opening of fashion week, Cara Delvingne received a Formula One chronograph watch in steel and black ceramic set with diamonds. A perfect balance of rock & roll and glamour just like her. “It is always a solemn moment when we welcome a new ambassador” emphasized Jean-Claude Biver, CEO of TAG Heuer and President of the watch division of the LVMH group. “The TAG Heuer family is not simply some airy-fairy idea, it is a team with true team spirit. We need someone like Cara, at once sassy and elegant, to help us captivate the youth of today, which is both cheeky and bold.” With a lion cub in her arms, Cara Delvingne swiftly let her some 9.5 million followers on Instagram know that she is teaming her cute face with TAG Heuer. Hashtag ? #DontCrackUnderPressure, obviously !

TAG Heuer on the dancefloors

David Guetta and the Nervo are on the turntable. These are the new faces of TAG Heuer.

His name means nothing to you ? There is only one thing that could possibly justify that : you’ve been living like a recluse for the past 20 years without access to radio, newspapers or television. And we won’t even mention the Internet ! So come on, ‘fess up, you do really know who he is! David Guetta is THE trans-generational DJ star who gets crowds on the dancefloor going the world over. Teens, students, 30-somethings, baby-boomers… He calls the shots with his international hits which play constantly on the radio and turn full throttle on the web. With his millions of followers on Facebook, Instagram and other social networks, the new TAG Heuer ambassador gets the whole world dancing. Less well-known, Australian twin sisters, Nervo, also get the turntables going on behalf of TAG Heuer, electrifying clubs, nightclubs and festivals, from New York to Ibiza via Las Vegas and Melbourne. The glamorous duo notably wrote the hit “When Love Takes Over” for David Guetta, which won him a Grammy Award. Models by day, dancefloor princesses by night, Mim and Liv Nervo perfectly embody hip, dynamic, bold youth that TAG Heuer also wishes to target. Let’s dance !

Kings of the tarmac

TAG Heuer is gobbling up the miles at incredible speed, foot to the floor in every area of sport. Tarmac remains its favorite hunting ground. Its track record consists of victories in the most prestigious automobile races in the world, brilliant sports ambassadors and exciting
partnerships. From straight stretches to tight turns, TAG Heuer pursues its unique trajectory and puts its unique stamp on top-rate performances.

The close ties that TAG Heuer maintains with the world of sport in general and motor sports in particular, is rooted in history like so many chapters. These exciting and essential milestones are dotted along the path followed by the watchmaker over the decades. From the Carrera Panamericana to the 24 Hours of Le Mans, from Jo Siffert to Ayrton Senna and Alain Prost, TAG Heuer has associated its logo with the most emblematic names in the world off automobile racing. A recurrent theme ?  Making its mark on history !

The history of the most prestigious endurance race, the 24 Hours of Le Mans, is branded with TAG Heuer’s hallmark. In 1970, Steve McQueen sent his speed machine throbbing through the cult film, Le Mans, with a Monaco chronograph strapped firmly to his wrist. In 1973, the Scuderia Ferrari proudly bore the iconic TAG Heuer coat of arms on its 312 PB prototypes. In 2009, Peugeot Sport had its turn to host it before making way for Audi Sport from 2010 to 2013. Nearly 40 years after Steve McQueen stole the show, TAG Heuer continues to write history at Le Mans. This time with Hollywood actor and distinguished racing driver, Patrick Dempsey.

With Dempsey Racing, TAG Heuer has every intention of continuing its historic trajectory : collecting wins like collecting laps. The same goes for Nissan that the brand is accompanying with style for its return to the Endurance World Championship circuits this year. Aboard the revolutionary new Nissan GT-R LM Nismo car, TAG Heuer will once again create a sensation on the tarmac.