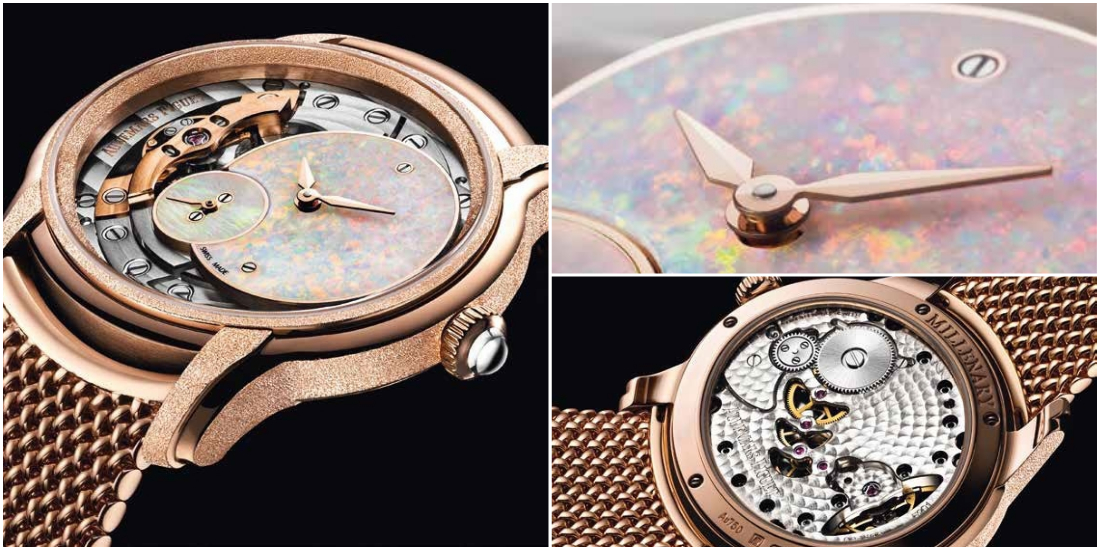 What do women want ? How do they see their watch ? As jewelry or instead as a technical object ? A functional accessory or a style signature ? The answers reflect the multi-faceted nature of femininity itself. For those who want it all – aesthetic refinement and rigorous mechanics, preciousness and technical sophistication –, Audemars Piguet has created an exceptional model : the Millenary Frosted Gold Opal Dial unveiled early this year at the Salon International de la Haute Horlogerie.

The Millenary Frosted Gold Opal Dial is the latest addition to a collection introduced in 1995 and that has asserted its alluring elegance to the point of occupying a key place within Audemars Piguet’s feminine range. Its best assets are an instantly recognizable oval shape and an offset dial that reveals tantalizing glimpses of its mechanical movement. This year, Audemars Piguet is revisiting the aesthetic codes that have forged the success of this style icon by adorning it with precious aesthetic that plays with light has never before. The show begins at the dial center, with an extraordinary white opal dial. Essentially composed of silicate and water, opal is distinguished by its splendid light effects, its nacreous glow and its iridescent colors. Delicately cut out from opals of the highest quality, each dial is entirely unique. Swept over by hours and minutes hands as well as offset small seconds, the new face of the Millenary remains true to the tradition of the collection, leaving ample space to reveal to the intricate technical elements driving the model. For beneath the enchanting opal shimmer lies an entire mechanical world expressed in all its glory. Specially adapted to the oval shape of the watch and its feminine style, hand-winding Caliber 5021 ensures impeccable precision, as well as featuring finely crafted aesthetics that can also be admired through the sapphire crystal case-back.

While the refined design of the Millenary remains one of the key features that make this model a watchmaking icon, Audemars Piguet has also endowed it with another exclusive signature leaving no room for doubt as to the lineage of this timepiece. The pink gold case shines in radiant splendor and plays with light in an entirely original manner. Yet no diamonds or other precious stones are set on its caseband that owes its frost-like sparkle to a metal surface treatment named “frosted gold”, inspired by a traditional metal hammering technique and also known as the Florentine technique. Jewelry designer Carolina Bucci has provided a modern interpretation of this jewelry technique, while the Audemars Piguet experts have adapted it to the unique construction process for the Millenary case. Carolina Bucci’s ateliers have been using the Florentine technique for many years, notably on slim, small pieces of jewelry. The process consists of hammering gold with a diamond-tipped instrument in order to create small indentations on the metal and thus achieve a sparkle similar to that of precious stones or diamond dust. Carolina Bucci has also used this finish in more daring designs, such as on larger cuff bracelets and pendants, in order to give pride of place to the Florentine finish and catch the light in more effectively. The result of applying it to Audemars Piguet watches, and in particular to the Millenary Frosted Gold Opal dial, is visually entrancing as well as ensuring a feel as soft as a second skin. Much like the Polish mesh bracelet embracing the wrist with infinite suppleness, setting the final touch to a truly dazzling creation.