Girard-Perregaux: the adaptability of an icon 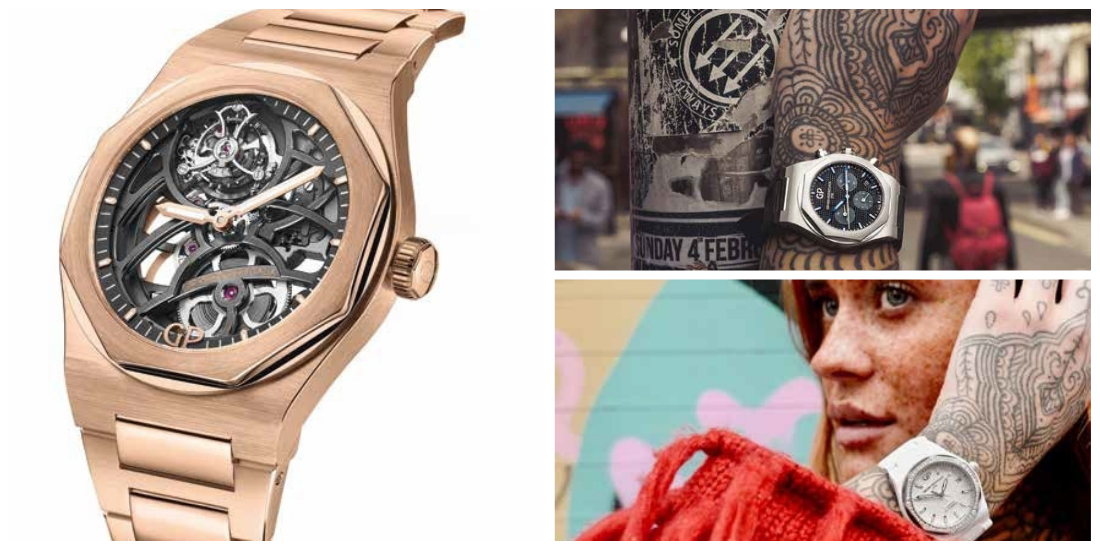 Three years after its return to the Girard-Perregaux collections, the Laureato is writing a new chapter in its history with the introduction of a broad range of chronographs, sophisticated use of ceramics and an emphasis on skeletonworking. Natural extensions of this eminently sport-chic collection, these new Laureato models once ago prove the strength and relevance of its design.

Versatility is a real achievement. A watch capable of hosting all complications, of finding its place on every wrist, flows from a successful design. The Laureato complies with the demanding layout of the subdials and pushers characterizing the Laureato Chronograph and with an interpretation in two 38 and 42mm sizes. Inside this ergonomic case, whether in pink gold or 904L stainless steel, Girard-Perregaux has fitted its self-winding chronograph movement powering two counters and small seconds as well as a date display. As well as guaranteeing impeccable precision timekeeping, it is distinguished by its comfortable power reserve and the particularly smooth activation of its pushers. These technical qualities are complemented by exemplary workmanship featuring chamfering and other surface treatments such as Côtes de Genève and straight-graining. All of them stem from the multiple skills exercised within the Manufacture Girard-Perregaux.

Pure, precious and as iconic as ever, the Laureato is presented in a 38 mm version in white ceramic. Thus attired, Girard-Perregaux’ emblematic sporting chic watch turns resolutely to the light. By slipping into this pristine white exterior, the Laureato once again demonstrates its ability to undergo multiple mutations through time in terms of both size and materials. Further accentuating its shimmering intensity, the Laureato 38 mm Ceramic White features a bezel and crown in steel, whose color is picked up in the hour-markers and hands. Better still, this bezel sparkles with 56 brilliant-cut diamonds. Ceramic is a noble and technical material that is at once light, virtually scratchproof and extremely well tolerated by the skin. While its extreme hardness makes it extremely hard to fashion, especially when it comes to following the complex shapes of the Laureato, Girard-Perregaux has painstakingly carved out of the block the octagonal bezel and the shape of the bracelet links, as well as endowing them with the desired textures.

Lines and curves. Interior and exterior. While these concerns are very much those of an architect, they undeniably define the Girard-Perregaux Laureato Skeleton. This watch with a metal bracelet and a skeleton movement is an exercise in horological architecture. Girard-Perregaux has drawn upon the origins of the Laureato, upon the noblest inspirations and upon its horological expertise. The rigorous and sensual rhythm of the curves of the Laureato Skeleton gives unique strength to the openworked watch in which the content harmoniously matches the container. The Laureato Skeleton has an exterior and an interior. Much like the Guggenheim Museum in New York, by Frank Lloyd Wright, this interior and this exterior are engaged in constant dialogue. The envelope is a rigorously designed 42mm-diameter, 10.88mm-thick case, available in stainless steel or 18K pink gold, matching the bracelet. It is impeccable proportioned and composed of well-defined curves and clean-cut lines. The content is a skeletonized Fine Watchmaking movement, Caliber GP 01800- 0006, entirely developed, produced, finished and assembled within the walls of the Manufacture Girard-Perregaux. It has undergone extensive skeleton craftsmanship. The bridges and mainplate are replaced by a clever interplay of solids and voids, alternating between the structural framework and inhabitable spaces, like the interior of a baroque-style Italian cathedral such as St. Peter’s Basilica in Rome.

And if this extraordinary know-how were not enough to convince one of the breadth and depth of means that Girard-Perregaux has brought to bear on this model, if it were not enough to prove the amazing adaptability of the Laureato, one need only consider the Laureato Flying Tourbillon Skeleton. Slightly offset near 12 o’clock, its skeletonized caliber features a flying tourbillon. Embodying the Laureato’s ultimate degree of horological complexity and exclusivity, this spectacular model proudly displays its regulating organ, appearing amidst a finely interlacing structure composed of bridges, plates, screws and gear trains. The Manufacture has invented a large-size caliber (14½ lignes, corresponding to 32.50mm in diameter), bearing reference number GP 09520-0001. Its mainplate, bridges and oscillating weight of the automatic winding system have all been painstakingly openworked. This elegant skeleton work enables observers to look deep into the very core of the mechanism and explore this mechanical heart. To highlight the stature of this kinetic sculpture, the dial is pared down to the absolute minimum in the shape of a chapter ring with applied gold hour-markers and logo. This minimalist décor, combined with a black PVD treatment of the fixed elements, ensures the flying tourbillon enjoys pride of place. Thus, whether appearing as a simple or sophisticated watch, for men or women, the Laureato continues its process of transformations and enrichments. This versatile, multi-talented and ensuring horological work of art is a… a true icon.