Ulysse Nardin: bringing the ocean to the wirst 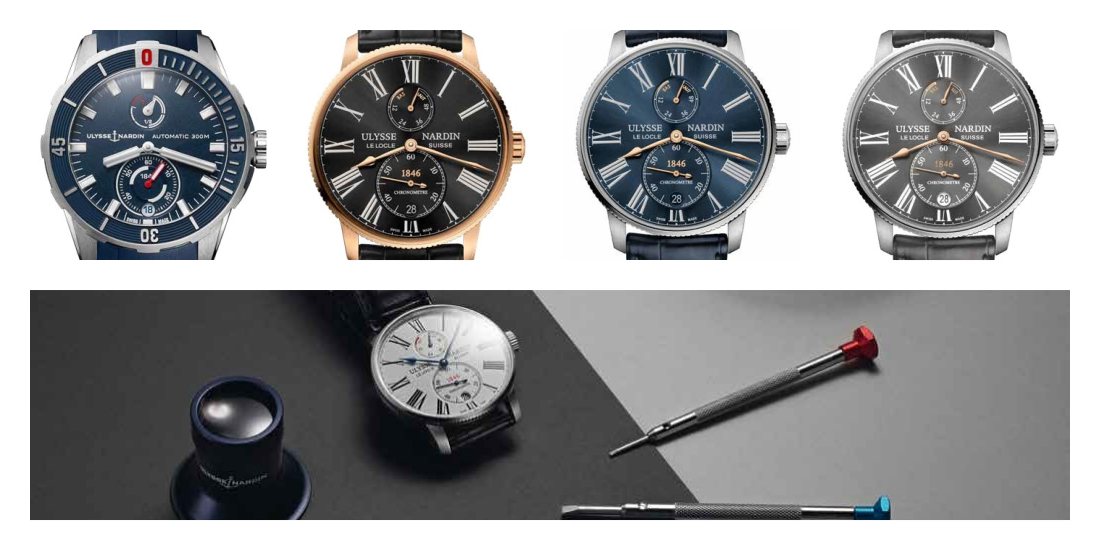 Launched in 2017, the Marine Torpilleur is the new flagship of Ulysse Nardin’s maritimeinspired collections. Three new ultra-contemporary recruits are joining the ranks of this squadron. These models will be stopovers among the many others on the horizon. In classic black or metal gray, steel or gold versions, these modern and understating war machines are as elegant and minimalist as the destroyer ships after which they are named. A third version, blue with gilt hands, is exclusively available online from Farfetch.com.

Originally introduced in steel with a white or blue dial, the Marine Tropilleur fleet now welcomes three stunning new editions: a pink gold version with a black and gold-toned dial: an exclusive stainless steel boutique version with a gray dial ; and a special online version for Farfetch. com with a stainless steel case framing a midnight blue dial adorned with gilt hands. The hours are marked off by elegant elongated numerals and graceful pear-shaped hands in a pink gold color, matching the “Haut” (high) and “Bas” (low power-reserve indications). The screw-lock crown is engraved with the Ulysse Nardin logo. At the center of the small seconds subdial at 6 o’clock sit the date aperture and the red “1846” logo, a nod to the founding year of the Maison. The timepiece is fitted with a luxurious strap in matching alligator leather.

Inspired by Ulysse Nardin’s maritime heritage and perfectly suited to modern urban living, the Marine Torpilleur is both extremely comfortable on the wrist and easy on the eye. An authentic captain’s chronometer certified by the COSC and by Ulysse Nardin, it embodies the best of contemporary as well as representing a pinnacle achievement of craftsmanship and skills cultivated across several generations. As CEO Patrick Pruniaux explains : “This is a less formal and more modern interpretation of the iconic Ulysse Nardin Marine Chronometer. It will appeal to our youthful customers and is a worthy heir to two revolutionary innovations dating back to the early 19th century. The first is well known to Ulysse Nardin enthusiasts: the famous pocket chronometer, whose unprecedented reliability and precision opened up the world’s oceans to merchants, sailors and adventurers. The second is the destroyer : a fast, maneuverable combat ship equipped with a new weapon – the self-propelled torpedo – and which easily held its own against the heavier and slower vessels that previously ruled the seas.”

The watch is powered by the UN-118 movement, the self-winding caliber driving the Marine Chronometer. Produced in-house, it is endowed with a 60-hour power reserve (indicated on a 12-hour counter) and equipped with Ulysse Nardin’s very own silicon pallet lever. The 42mm case has been entirely redesigned with elongated, lighter hands, a fluted bezel that is fixed and slimmer, with a narrower inner bezel ring.

After the surface, the depths. Ulysse Nardin offers a thorough makeover of one of its bestknown and most emblematic models, the Diver. In the wake of the Diver Deep Dive Hammerhead presented at the SIHH 2018, the brand is treating its 300-meter water-resistant diver’s model to a new design. A new case in matt titanium. A stripped-down dial with a finely grained surface instead of a pattern. A bezel featuring simplified and more geometrical notching, a treatment also applied to the crown. Solid, straighter hands are mainly designed to create a contrast. A more legible, clearly compartmentalized small seconds subdial with a hand standing out against the background. The diameter remains unchanged at 44mm, as does the water resistance. This model is fitted with the selfwinding in-house chronometer-certified UN-118 caliber that ushered Ulysse Nardin into an era of complete independence. It is equipped with a silicon escapement and ensures a 60-hour power reserve. Thanks to these attributes, the Diver 44 mm becomes an ultra-utilitarian object in which functionality supersedes ornamentation, thereby propelling it firmly into the field of instrument watches.