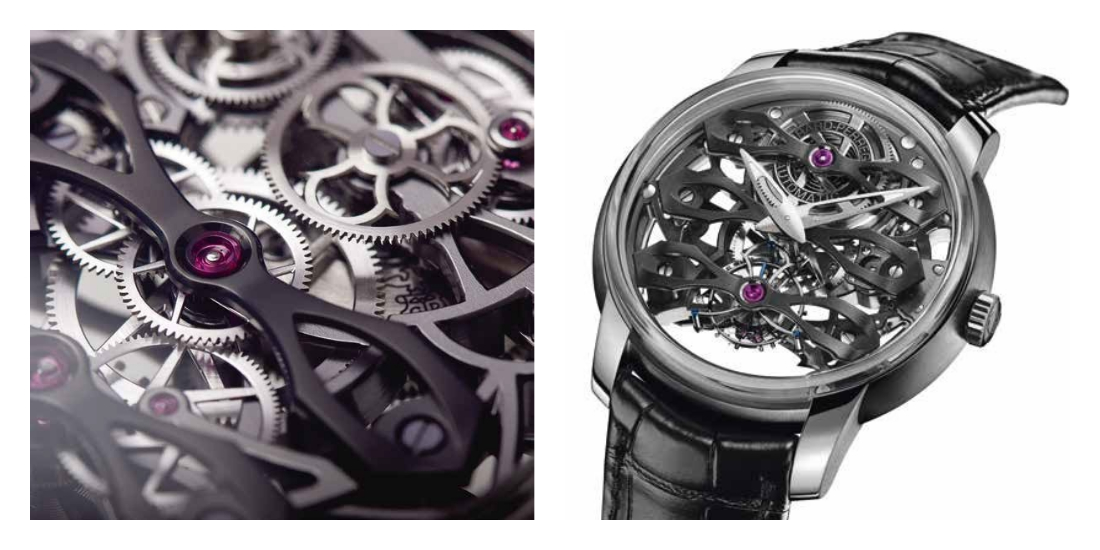 The timepiece as a 45mm-diameter case. Its ample curves and large glazed areas are reminiscent of a panoramic observation platform from which to admire a watchmaking monument, given that architectural references are legion at Girard-Perregaux. Dominated by sapphire rather than titanium, the case is built so as to maximize the view of the movement, itself based on the principle of transparency. The dialside crystal is of the glass box type, steeply cambered and convex. This technical and visual element reveals the structure, the internal network of reinforcements that give strength and shape to a building – its ‘skeleton’.

In Caliber GP 09400-0011, the skeleton working virtually eliminates the baseplate. As if the ground had vanished beneath its feet, the movement finds itself suspended between two layers of air. The bridges contribute to the overall transparency of the caliber. They are made of titanium, sandblasted and then blackened by a PVD process. Their 3D shape is so complex, composed of interior angles, arches, extensions and overhangs, that their machining is a watchmaking feat in itself. The result is a free, sensual, taut and powerful shape. The supple, light and spectacular Neo Tourbillon with Three Bridges Skeleton is an eloquent contemporary expression of Girard-Perregaux’ structural and technical mastery.