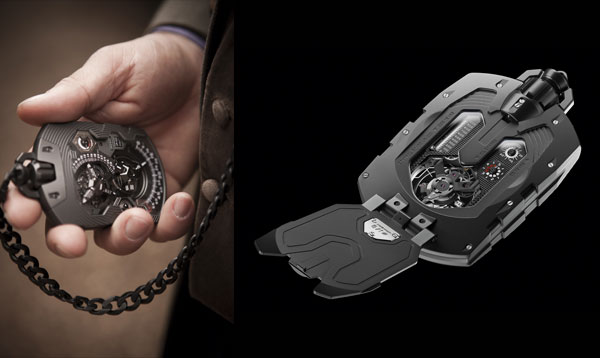 The list one can say about this test bench candidate is that it’s well off the beaten track. When it was handed over to me, I experienced a combination of perplexity, surprise and wonderment to the point where I was somewhat thrown off-balance and was not sure if I should salute genius or demand the immediate internment of the tandem behind this extravagant delirium.

Felix Baumgartner and Martin Frei have of course not accustomed us to conventional creations, but with the UR-1001, one cannot help feeling that this time they’ve really gone too far (to our delight).

It took several days to get to grips with this object that is so original that it defies description and someone will just have to invent a term, since the words generally used to describe time measuring objects would be simply too restrictive.

The case of the UR-10001 is 106 mm long, wide and 23 thick – meaning more or less the size of a large smartphone. Machined from a block of steel, its surface is coated in aluminium titanium nitride, an industrial alloy known for its hardness and enhancing resistance to oxidation. This same treatment lends a semi-matt black colour that accentuates the virile personality of this model. The front of the case is adorned with circular grooves making a striking contrast with the well-defined angles of the case and watch glass, vividly evoking a perfectly mastered “squaring of a circle”. The glass features a variety of external and interior angles and is generously curved and exceptionally large – a set of criteria that naturally elicit our admiration of the maker. We will not dwell in this chapter on the parts related to the information displays, since the latter are an integral part of the movement itself. A mention is however due to the hinged cover on the back, if one can call it that, which provides access to information the wearer will tend to consult less frequently. Given that the Zeit Device is equally liable to be worn as to sit on a desk or a cabinet,  is delivered with a presentation box serving to keep the movement wound by oscillating it at a 185° angle, as well as a blackened steel chain. Urwerk even offers to make a tailor-made suit in which the waistcoat will feature a pocket made to accommodate the outsized dimensions and substantial weight of this object.

While this UR-1001 definitely cannot be compared with existing timepieces nor with any objects foreign to watchmaking, the Urwerk identity is more strongly present than ever, due to the satellite hours and retrograde minutes display which in this case is oversized and associated with an annual calendar featuring the same display (satellite months and retrograde date). On the same side, day/night indicator and power-reserve indicators complement the most generally useful information. Meanwhile, the back cover opens to reveal a five-year oil-change indicator, with the zone between 3 to 5 years graduated in red to signal the need for maintenance, and which can be systematically reset once the service has been duly performed. To facilitate the work of watch experts or even ethnologists of far-distant centuries, an indicator counts the years up to one hundred… and another up to one thousand! This entire set of information is designed to consume very little energy, to the point that a single barrel wound by a unidirectional oscillating weight is enough to guarantee a 39-hour power reserve, which is quite sufficient in light of the winding box supplied with the watch.

The multiple finishes give pride of place to the Clous de Paris hobnail motif, circular-graining and Côtes de Genève. The oversized mirror-polished surfaces of the diamond-polished bevels create a truly dazzling effect.

In order to be able to perform reasonable rating measurements, yours truly had to first remove the microphone of his Chronocomparator device, since no model is designed to accommodate such an object. Despite this tinkering, measurements were hard to make because the thickness of the “armour plating” tended to muffle sounds. Only two positions seemed worth measuring: horizontal with the dial facing upwards, and vertical with the crown facing upwards. In both cases and when fully wound as well as after 24 hours of running, the measurements ranged from 0 to +3 secs./day. The amplitudes were perfectly situated between 258° and 286°. Although these measurements must be relativised given the mediocrity of the recorded signal, it is quite obvious that Felix Baumgartner has optimised the adjustment for these two main operating positions. The readability is unmatchable thanks to the distinctive display mode, the extreme size, and the use of superluminova on all the numerals and all graduations. It is in fact so bright that using it as a bedside watch could genuinely disturb light sleepers. Operations such as winding and time-setting are extremely user-friendly, since all these manoeuvres are performed via the huge crown. Finally, the retrograde functions are perfectly adjusted to ensure the security of the mechanism and to guarantee exemplary low-energy running.

As we mentioned in the introduction, Felix Baumgartner and Martin Frei have really gone too far. And they were so right to have done so! After a week spent with the UR-1001, my opinion has been clearly forged. The twosome have really pulled out all the stops, going beyond everything that had already been done, beyond anything that had even been imagined – and that is what significantly reinforces their brilliance which had already been widely acknowledged. The only quibble one might raise, for objectivity’s sake, and well aware that it stems from a pernickety mind-set, is that the back cover might have been designed so as to form a base enabling one to use the UR-1001 as a vertical desk watch. The overall weight might indeed have been an obstacle to the reliability of such a system, but it seems insignificant in light of all the others that have been so cleverly overcome.

Finally, one of the first questions that sprang to mind when discovering this otherworldly object was to wonder for whom it was intended and what the buyers’ motivations might be. By the end of this testing bench, that question had become superfluous: what does it matter ? The sheer genius of this object is that its creators have followed their imagination to its ultimate limits, without asking that kind of question. Issued in an eight-piece limited edition, this timepiece will maintain its supreme UFO status for the next 1,000 years displayed on its back ! 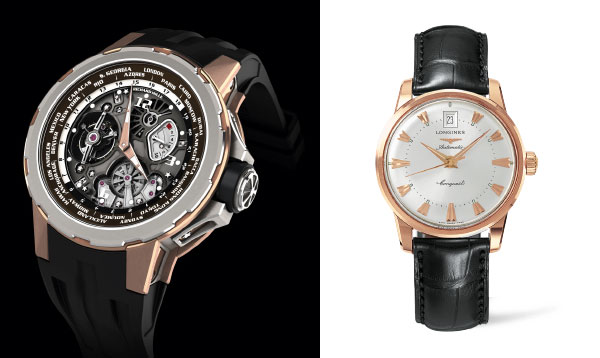 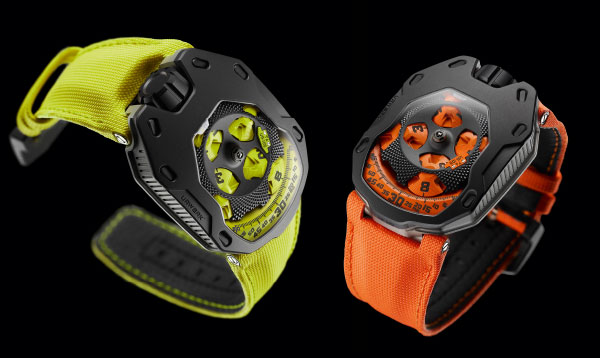 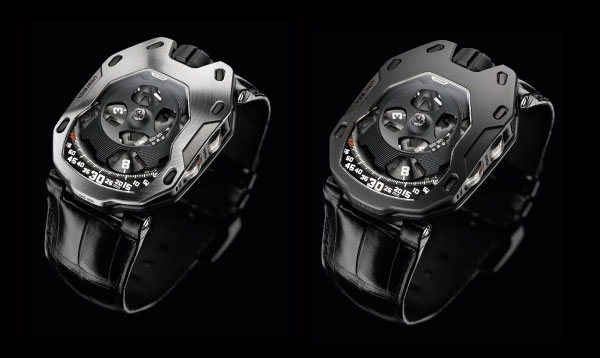