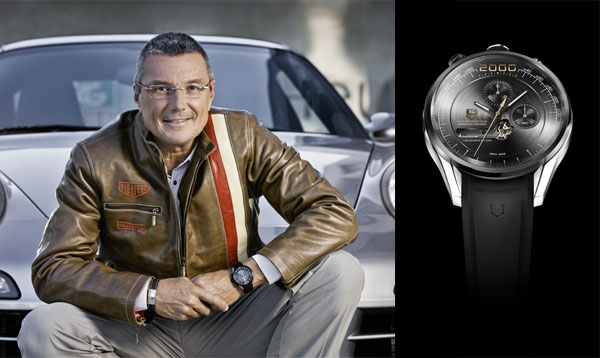 You recently announced new accomplishments in the field of chronograph precision ; could you tell us more ?

Last year we presented the world’s first mechanical chronograph displaying 1,000th of a second thanks to a frequency of 500 Hz. The Mikrotimer Flying 1000 was issued in limited series that were successfully commercialised. Building on this R&D platform, TAG Heuer’s in-house teams have now reached the unprecedentedly high frequency of 7,200,000 vibrations per hour, enabling measurements of 5/10,000ths (1/2,000ths) of a second. This meant at that the start of 2012 we were able to unveil two functional prototypes of the Mikrogirder, which is protected by ten patents. It is in fact a whole new principle that has been thus invented, the equivalent of the shift from propeller to jet planes. Since 1675, the hairspring/balance wheel system devised by Christiaan Hugygens has been handling the regulation of all mechanical watches, but the Mikrogirder is equipped with an entirely different regulating organ. Its system based on a coup-ling beam (also referred to as a blade or girder) and an excitatory beam working with a linear oscillator (rather than a classic spring) operates without inertia, like a violin string : its amplitude amounts to a mere 4.5 degrees, compared with 250 for a classic watch. It thus consumes very little energy and the risk of wear is extremely low. The excitatory blade recovers the “wild” energy released from the barrel, and transmits it to the coupling blade, while a third more rigid blade regulates it, transforming it into divisions of time vibrating at exactly 10,000 Hz. In lab conditions, we reached 3000 HZ, but at that frequency one simply cannot make any readings, whereas at 1000 Hz one can read off 5/10,000ths (1/2,000ths) of a second. This original principle thereby breaks 10/10,000ths of a second down into two units for the first time, while remaining legible on the dial, and we have now moved on from the initial principle to the production stage.

How were the other innovations presented at the beginning of the year received ?

Given the worldwide success of the Formula 1 collection, our retailers have been entirely satisfied with the 18 new versions derived from it. We continue to provide great value for money with our items (men’s models sell for around CHF 1200 and 2000), which gives us an enormous competitive advantage. The automatic versions for women and new references with an alarm function, that TAG Heuer is virtually the only brand to offer in this sector of prestigious watches, have been particularly well received.

What role will your new ambassador, Cameron Diaz play ?

We are launching a new line at Baselworld 2012, with which she is associated. This is simply a much more feminine line than the Formula 1, which makes a perfect match with the sportier personality of Maria Sharapova. She and Cameron Diaz are neither the same age nor do they have the same image ; they simply each play very well in their own league.

Having put the emphasis on mechanical sports in the past few years, you are once again getting involved in nautical sponsorship. What are you expecting from this ?

TAG Heuer has an important, historical range called the Aquaracer, which represents a natural, elegant environment for sailing. Becoming official timekeeper for Oracle is a double “whammy” in the sense that the Defender of the 34th America’s Cup, Oracle, is the only team authorised to use that name, and the same goes for its partners. Additionally, Oracle’s approach is very high-end, which suits us. Finally, they are the only ones to have committed two boats, and this doubles our visibility and our chances of winning ! The new format of the oldest sports trophy in the world makes it particularly spectacular and easy to follow.

TAG Heuer withdrew after having participated in the enquiry held by the Competition Commission (Comco) aiming to establish possible abuse of the Swatch Group’s dominant position following their announcement of the reduction of movements to third parties by 15%.  Could you please explain why ?

Firstly, the Committee sent questions to which we replied with the facts, although we were not under any legal obligation, emphasising whatever we thought was accurate. After this, we were contacted by other brands which asked if we wanted to join them in filing a complaint. We developed a project but didn’t register it in the end. It would appear that the Comco had pre-authorised Swatch’s decision, and knowing the history of their relations, the die was already cast. So with this in mind, why get involved in the struggle ? We weren’t interested in having a fight with the ETA, which is still our main movement supplier; and conversely, even with about 15% less, we must be ETA’s number one client along with Sellita. Mr Hayek warned the sector in 2005, and we began to get organised in order to find a solution.