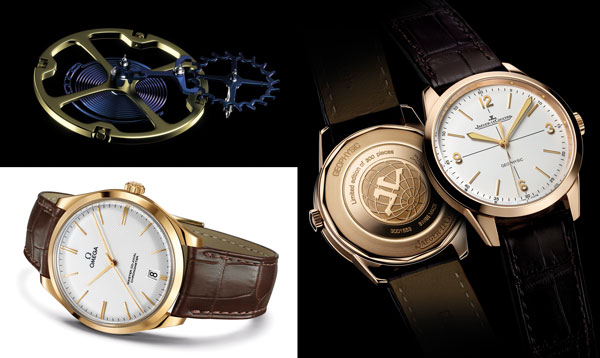 Mechanical movements do not like magnets. They are sensitive to magnetic fields that can disturb their running or even bring them to a halt. This is because mechanical calibers comprise steel components, notably including the balance-spring. The ferro-nickel alloy of which the latter is composed contains a large proportion of iron, even though it is designed to be theoretically immune from any external disturbances, yet our ever more powerfully magnetized world increasingly tends to push past the boundaries of this supposed imperviousness.

The first steps taken towards insulating watches from magnetic fields date back to the start of the 20th century. An early solution emerged in the shape of a Faraday cage (shield) – a pure steel enclosure deflecting magnetic fields with formidable efficiency. Simply surrounding a caliber with such a screen is enough to protect it and this technique is indeed still used to this day. It protects the Panerai Luminor Submersible 1950 Amagnetic from fields equivalent to an impressive 40,000 A/m. While this cage remains the simplest and cheapest option, it has three inherent drawbacks. Firstly, iron is not transparent, which precludes the use of a sapphire caseback; secondly, this solution is visually unappealing ; and finally, the degree of protection afforded by iron is proportionate to its thickness and thus increases the volume and weight of the mechanism.

The fight against magnetism enjoyed its heyday in the 1950s, when the boom in scientific, space and geographical exploration meant subjecting watches to new and extreme environments. This period saw the birth of the the Milgauss from Rolex, designed to operate in the vicinity of the CERN’s particle accelerators; as well as the Jaeger-LeCoultre Geophysic, dedicated to polar exploration. These two watches have been treated to recent re-editions. In parallel, electronics were inexorably gaining ground in our daily lives : TV screens, loudspeakers, domestic appliances and plane travel all insidiously disturb our watches.

Instead of insulating movements from magnetic fields, some solutions involve avoiding them altogether by using non-magnetic materials. Tissot pioneered this idea, with the Astrolon introduced in 1972 and featuring an all-plastic movement. The ‘noblest’ option consists in using gold, which is perfectly amagnetic, and a number of balance-wheels are made of this precious material. H. Moser & Cie uses it to make levers and even some whole movements ; while F.P. Journe goes yet further by systematically using gold to make its calibers.

Silicon is the most effective way of avoiding exceptional costs, since it is easily machined, inexpensive and entirely impervious to magnetic fields. A complete escapement (balance-spring, lever and escape-wheel) made of this material – such as Ulysse Nardin’s Caliber UN-118 – is immune from the effects of magnetism. But there is still the vast amount of metal represented by the rest of the movement to deal with. Omega has opted to solve the problem by literally swallowing it : its new Master Coaxial is made from an alloy based on a secret formula and able to resist magnetic fields greater than 15,000 gauss. The magnetic rays go right through it but do not affect it. This principle is used in the extremely dressy new DeVille Trésor timepiece, thus confirming that all watches are at risk of being magnetized, not only sporty models or those specifically built for adventure.