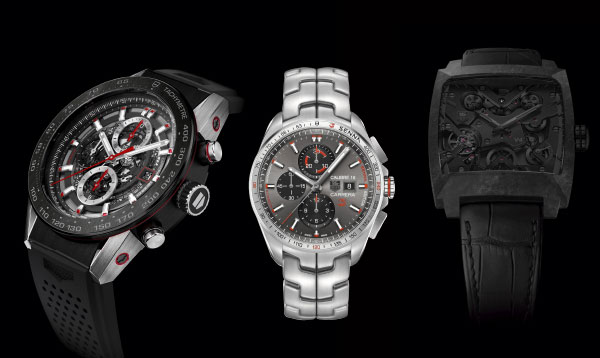 High-performance movements, strong materials, intense style : TAG Heuer is all about placing watchmaking in the service of velocity.

On race tracks as well as on wrists, TAG Heuer is powering ahead in a process of profound renewal. Endowed with a new case, a new construction, a new design and a new caliber, the Carrera Heuer 01 embodies the future of TAG Heuer chronographs. The Carrera was chosen because no other model better symbolizes motorsports : indeed its very name means ‘race’. The extremely modular new-generation case in light and sturdy titanium is composed of 12 different elements and opens up a broad range of possibilities by combining various materials, colors, treatments and finishes. It is fitted with a perforated leather strap setting the final touch to its sporty and sophisticated look. Heuer 01 is the name given to the new TAG Heuer caliber. An evolved version of the resolutely horological Caliber 1887, it is the backbone of this new collection. Its new skeleton design reveals the chronograph controls and the openworked date disk on the dial side, while the red column wheel and the skeleton-worked chronograph bridge and black oscillating weight visible through the caseback proclaim the technical nature of the Carrera Heuer 01. It is also a symbol of TAG Heuer’s ongoing investments. These strengths and resources are necessary to maintain the brand philosophy centered around on the slogan “Swiss avant-garde since 1860”, which naturally involves pursuing the Manufacture-based strategy under way for many years now.

This principle is also expressed through outstanding haute horlogerie creations, a field on which TAG Heuer had made its iconoclastic mark with the Monaco V4. This model symbolizing TAG Heuer innovation continues to evolve. Its sleek, matt-finish total-black almost stealth Phantom version is made of carbon fiber, applied to its case, as well as the seven bridges of its movement featuring the unique existing belt-driven transmission system. The technology used to make them is a carbon matrix composite in which the carbon fibers are cleverly oriented to ensure enhanced resistance and a unique black vertical-brushed matt finish. The entire dial features subtle shades of dark gray or black, with the movement jewels providing the only discreet touches of red.

This shade of red is the color of speed. It has always been the emblem of the headline ambassadors in the brand history. In 2015, Ayrton Senna thus once again takes his place on the TAG Heuer roster. In an exceptional event held on May 7th 2015, Fernando Alonso and McLaren-Honda F1 Team came to share in a unique moment. The hologram image of Ayrton Senna appeared on stage before the entire Formula 1 family that had gathered for the occasion on the eve of the Spanish Grand Prix in Barcelona. Wearing his driving suit and with his helmet under his arm, he stood facing Spanish driver Fernando Alonso, champion of the McLaren-Honda racing stable. The return of Ayrton Senna to TAG Heuer is marked by a new advertising campaign dedicated to the champion and four special series. They all feature the red lacquered stylized “S”, its symbol, appearing on the dial, the caseback and the dial, thereby giving them a distinctly Racing character. It also spells the return of the “Legend” bracelet with its S-shaped links that Ayrton had adopted. Now redesigned and more rounded than ever, it recaptures the kind of optimal comfort inherent in its original version.

TAG Heuer surges at the speed of communication, and thus of light

Communication speed is that of electrons, and therefore of light itself. Given that TAG Heuer has long since bound its destiny to that of performance in general and technological feats in particular, the brand has announced a partnership with two Silicon Valley giants in order to prepare the launch of a connected watch. This joint effort combines the respective expertise of TAG Heuer in the field of luxury watchmaking, Google Android Wear in software, and Intel in hardware. Together, the three companies are going to create a watch fully connected to its user’s daily life and that will feature a blend of the innovation, creativity and design from the Silicon Valley in California and the “Watch Valley” in La Chaux-de-Fonds, Switzerland. Far from confining itself to a single register, TAG Heuer watches adapt to their times like a Formula 1 car does to a track, while remaining loyal to the two underlying principles of performance and quality.

30 years in the red zone of the rev counter

On the occasion of the 30th anniversary of the partnership with the McLaren Formula 1 team, TAG Heuer returns to the origins of a pioneering alliance. “Rocket Red” is the color inspired by the 1985 McLaren and featured on the new Formula 1 McLaren Limited Edition. It appears on the engraved aluminum bezel, as well as in distinctive touches on the inner bezel ring and the sturdy NATO strap that gives a sporting look to the model. Its three snailed counters contrast with the opaline black dial and give a distinct impression of speed. The back of the case pays tribute to the TAG Heuer – McLaren partnership with an engraving of the 1985 MP4 racing car and also bears the engraved limited-edition number.

On tracks, in the city as well as on the high seas, TAG Heuer devotes its expertise to the most demanding sports. With their new more angular design that is more chic than ever, these diver’s watches water-resistant to 300 meters highlight satin-brushed finishes and horizontally grooved dials. Radiating a blend of sturdiness, suppleness and elegance, Aquaracer timepieces are as versatile as they are sleek and sharp. 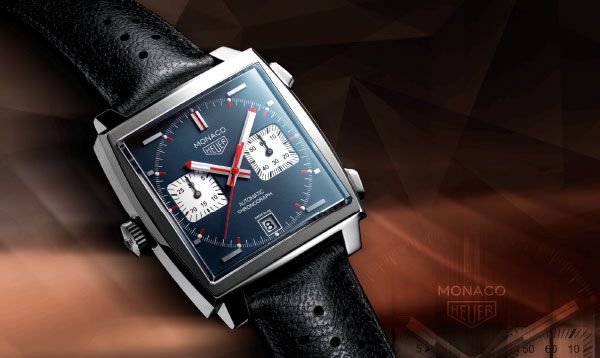