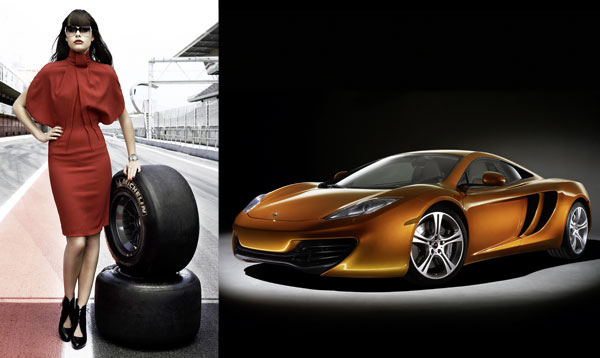 Edouard Heuer founded his watchmaking workshop in the Swiss Jura in 1860, before relocating six years later to Biel, where he became fascinated by the automobile prototypes manufactured by the nearby Henriod company. A pioneer in large-series production of chronographs in the 1880s, he filed a patent in 1887 for a revolutionary mechanism that it still in use to day: the oscillating pinion, which meant chronographs could start in less than 2/1,000ths of a second. As cars became ever faster and more sophisticated, the Heuer workshop kept pace with this progress through the consistently timely development of exactly the kind of equipment required by manufacturers and drivers. In 1911, Heuer was the first to develop integrated dashboard chronographs. In 1916, Heuer took precision to a new level with the Mikgrograph, the first stopwatch accurate to the nearest 1/100th of a second. In 1958, Heuer completed work on the Rally Master, an onboard timer comprising an eight-day clock and a twelve-hour stopwatch for long-distance races. Throughout the 20th century, TAG Heuer constantly refined the precision of its models. The Microtimer was the first watch to measure 1/1,000ths of a second, prefiguring the day when TAG Heuer was to become the first watch brand to achieve the mind-boggling 1/10,000th of a second accuracy indispensable to modern motor sports. TAG Heuer’s passion for racing goes well beyond producing cutting-edge equipment. This commitment also involves supporting and nurturing teams and drivers. Not only was it the first watch brand to sponsor top racing drivers, it also became the first sponsor of an entire Formula 1 team – none other than the legendary Scuderia Ferrari.

TAG Heuer was the first brand ever to sponsor drivers. It all began in 1969, when Jack Heuer signed a contract with Swiss driver Jo Siffert. Today, the list of stars who have raced under the TAG Heuer colours reads like a motor racing hall of fame. Generations of gifted drivers have worn the shield-shaped logo on their racing overalls, from Jacky Ickx and David Coulthard to Lewis Hamiilton and Jenson Button today – along with some of the greatest F1 multi-champions such as Niki Lauda, Alain Prost, Fernando Alonso, Ayrton Senna and Mika Häkkinen. One of the most iconic ambassadors was Steve McQueen. The actor lived to race, and went as far as to star in the Le Mans film in order to capture the very essence of endurance racing. To ensure every detail of the film was authentic, Jo Siffert, already a brand ambassador, acted as a technical consultant on the set. Steve McQueen insisted on wearing exactly the same racing overalls as him… as well as the blue-faced Monaco watch that shot to worldwide fame because of the movie.

TAG Heuer has always been active in racing paddocks in several different ways. In the 1970s, TAG Heuer engineers supported Ferrari by devising the electronic Le Mans Centigraph timer. This instrument enabled Ferrari to record timings to within 1/1,000th of a second, helping it to win three F1 World Champion Drivers’ titles and four Constructors’ titles. TAG Heuer’s next challenge lay in building that 1/1,000th of a second into a wristworn chronograph. The result was the Chronosplit, the world’s first quartz wrist chronograph equipped with a double digital display. Since 1985, TAG Heuer has been supplying McLaren drivers with cutting-edge timekeeping technology for their test sessions. It is thus no coincidence that McLaren has notched up over 120 Grand Prix wins and been victorious in the World Drivers’ Champion nine times. All the winning drivers are now part of the legend: Ayrton Senna, Alain Prost, Mikka Häkkinen, Lewis Hamilton and Jenson Button. Each in his own way is or has been a TAG Heuer ambassador. TAG Heuer’s pioneering precision has put it at the forefront of Formula 1 since the very beginning. It established the company as official timekeeper on the most prestigious circuits for the world’s top-performing teams. In parallel, Audi Sport has chosen TAG Heuer as official partner and timekeeper. In 2010, the three Audi Sport/TAG Heuer teams achieved a sensational feat by reaching the podium on the world’s most famous racing track, that of the Le Mans 24 Hours. In 2011, the Heuer-Carrera Mikrograph is the first mechanical watch to indicate 1/100ths of a second by means of a central hand, and to do so in an extremely simple and readable way (as presented in the magazine).

Speed in the masculine mode

The Carrera line enjoyed a great end to the year 2010, since its model equipped with Calibre 1887 featuring an integrated column wheel, entirely made in-house by TAG Heuer, won the Petite Aiguille prize in the Geneva Watchmaking Grand Prix. It is starting the year 2011 in pole position via a limited series dedicated to the partnership between TAG Heuer and McLaren have been enjoying for over a quarter of a century. Named after the first GT car developed by McLaren and launched in 2001, the Carrera MP4-12C chronograph echoes the sleek design, colours and materials of the prestigious roadster. The carbon dial is inspired by the monocell carbon fibre front vents. The sapphire crystal inserts in the caseback reveal the automatic movement much like a car engine, while the dial is distinguished by its high-tech look. The perforated leather strap is lined with alcantara, a material that can also be used for the upholstery of the MP4-12C. Finally, the case is made from sandblasted grade 2 titanium. The 1,000 watches of this limited series will be sold exclusively through the McLaren network, and the carmaker’s logo adorns the crown of this Carrera chronograph equipped with a flyback function and a semi-perpetual calendar.

Speed in the feminine mode

TAG Heuer’s teams have pulled out all the stops in order to appeal to sporty women with a penchant for elegance and innovation, by introducing no less than four monochrome versions of the TAG Heuer Formula 1 Lady Steel and Ceramic Chronograph now enriching this line and featuring a slightly more generous diameter than before. The obvious differences between steel and ceramic make for a fascinating combination, particularly on the three models set with sparkling diamonds. Ceramic is of course perfectly scratchproof, and yet appeals to a variety of senses through its soft, velvety touch and light, stable nature.

The fastest track of them all

Throughout the 20th century, TAG Heuer tirelessly perfected the precision of its models. Each step forward in the field of timing motor races enabled TAG Heuer to enhance its watchmaking expertise. This is why its most iconic collections bear names reflecting its commitment to motor sports, such as the Monza. The feats accomplished in Grand Prix races are no coincidence; they result from weeks and months of relentless hard work accomplished behind the scenes, and from drivers’ constant determination excel in order to improve their times. The same is true of the brand’s designers, watchmakers and engineers, who regularly seek to improve the existing models. The story of the Monza begins in 1975, at a time when Ferrari had been sporting the Heuer logo on its Formula 1 racing cars for the previous four years. On a warm September day in Monza, the fastest track in the Formula 1 World Championship, Ferrari drivers Clay Regazzoni and Niki Lauda respectively took 1st and 3rd place on the podium. Niki Lauda and Ferrari were that season’s world champions. To celebrate this victory, Jack Heuer created a new line of limited-edition chronographs equipped with Calibre 15 and named Monza. The 2011 automatic-winding version maintains the aesthetic codes of the 1970s, but its transparent caseback reveals Calibre 36, a “speed machine” beating at the rate of 36,000 vibrations per hour. Prospective owners will also need to be fast in trying to secure one of these watches, issued in a 1,911-piece limited edition.

Hundredths for the hundred and fiftieth!

Tirelessly innovating to improve sports timing and the performances of our watches. For 150 years, TAG Heuer has been constantly dedicated to rethinking time measurement. In 1916, its Mikograph was already the first timer to display 1/100thof a second precision. Today, the Heuer Carrera Mikrograph is the first mechanical watch to indicate 1/100ths of a second by means of a central hand, and to do so in an extremely simple and readable way. In order for the chronograph operation not to interfere with the watch movement, two balance wheels, each with their own transmission and escapement system, oscillate inside the case at their own rate: one at a frequency of 4 Hertz, and the other at 50 Hertz (360,000 vibrations/hour). This double construction with its 396 parts and 62 jewels may be admired through the sapphire crystal caseback. The degree of expertise required of the watchmakers capable of assembling such a (COSC-certified) gem, together with the considerable time involved, mean that only 150 of these watches will be available – naturally for those who are quickest off the mark!