TAG Heuer : Foot to the floor for 50 years 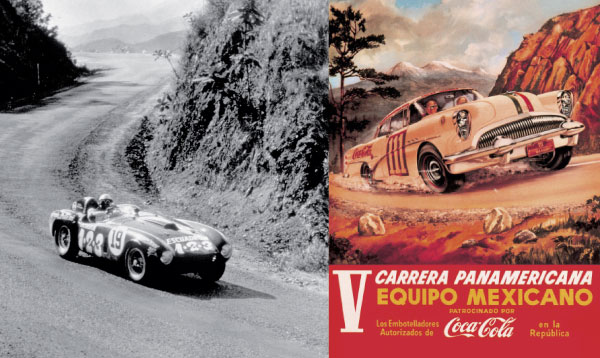 Prior to being a watch, the Carrera was a race. The most dangerous, deadly race in the world. In five years, from 1950 to 1954, 30 fatal accidents took place on this circuit. Prior to being a watch, Carrera was also a sound, a simple word of which the multiple meanings – road, race, career – instantly attracted Jack Heuer when he heard it for the first time, in 1962, while taking part in the Sebring circuit in Florida. Prior to being a watch, the Carrera was finally an inspiration. A design. A practical implementation of the aesthetic culture of Jack Heuer, who, throughout his studies, was an ardent fan of modern design. Le Corbusier, Charles Eames, Eero Saarinen, Oscar Niemeyer… Gifted with a keen eye developed by observing the works of the greatest names in architecture and contemporary design, Jack Heuer designed the lines of his first Carrera chronograph. The year 1963 thus saw the birth of an icon that has been perpetually renewed ever since.

Carrera shifts up a gear

Its name instantly evokes the sound of screeching tires and the acrid smell of hot tarmac. Over 50 years since its launch, the Carrera remains as fascinating as ever. In 2014, the legend is reinvented while remaining loyal to its classic aesthetic. A new in-house movement also hits the track.

It had been on the starting grid for a little over two years and is now ready to power TAG Heuer chronographs – starting with the Carrera. Calibre CH 80, the latest in-house movement produced by the high-tech Manufacture in Chevenez, in the Swiss Jura, is off to a flying start by equipping one of the latest additions to the collection to be unveiled at Baselworld. A direct descendant of the Calibre 11 launched by Jack Heuer and his teams in 1969, the new movement draws upon the experience acquired by the House in the design and production of Calibre 1887. Equipped with a vertical clutch, Calibre CH 80 delivers exceptional power and precision. The design of the indications is fairly classic with a minutes counter at 3 o’clock, an hours counter at 9 o’clock and a seconds counter at 6 o’clock. These useful functions are combined with a central chronograph hand as well as a date window at 9 o’clock. In substance, a high-performance movement giving pride of place to readability.

Readability is indeed the cornerstone of the Carrera collection. The new models certainly do not betray their origins. An uncluttered design, a wide dial opening… All the signature codes of the Carrera are clearly present. Radiating an extremely classic style, the TAG Heuer Carrera Calibre 5 Automatic – 39 mm highlights its refined facets by clothing in rose or yellow gold the bezel, the crown, as well as the H-shaped bracelet on which it is mingled with fine-brushed steel.

A newcomer to the Carrera Calibre 5 range, the Day Date takes refinement to new extremes. The delicately rose gold-plated hands, indexes, date window and the logo are all delicately hand-fitted by TAG Heuer dial-making artisans. The date window with its polished sides provides a simultaneous day and date display.

Finally, the Carrera lends itself to all kinds of escapist dreams with the Calibre 7 Twin-Time Automatic – 41 mm. The 24-hour scale around the inner bezel ring of the sunburst-effect anthracite dial indicates the second time zone via the central hand in the shape of a sporty red arrow. (MdP)

With four manufacturing sites and two movements produced in-house, TAG Heuer has boosted its industrial development. The Swiss company is ensuring its independence and consolidating its leadership position in the realm of chronographs.

Securing its future. The expression has never made more sense for the company from La Chaux-de-Fonds as it has since it has been able to proclaim its status as one of the rare Swiss manufacturers with the ability to produce its movements, cases and dials internally. For the past ten years, in order to keep pace with rapid growth and the considerable supply problems encountered by the stakeholders in the Swiss watchmaking industry, TAG Heuer has been proactive with a global investment strategy focused on the long term. This has meant turning on the turbo boost for its vertical integration process!

Flashback to 2004. TAG Heuer inaugurates the Cortech Manufacture in the commune of Cornol in the Jura. Some 150 engineers and craftsmen work onsite making steel, steel and gold or completely gold cases – both on machines and by hand – which house the brand’s timepieces. Five years later,in 2009, TAG Heuer reinforces its investment by integrating a production workshop for bridges and plates for its mechanical movements. This new production facility enables it to manufacture no less than 1,000 calibres per week. In 2010, TAG Heuer shifts up another gear with the opening of its two assembly workshops on the main site at La Chaux-de-Fonds, followed in 2011 by the acquisition of ArteCad, a manufacturer operating in Tramelan since 1885 which specialises in the production of high-end dials.

2012 was also a turning point with the construction of the brand’s fourth Manufacture, inaugurated at the end of 2013 in Chevenez, in the Jura. This high-tech site with its 2600m2 surface area entirely devoted to the production of two in-house TAG Heuer movements – the famous Calibre 1887 launched in 2009 and the new chronograph movement unveiled at the end of 2013, Calibre 1969 – is the company’s new flagship facility. A 40 million Swiss franc investment was required to achieve industrial-scale manufacturing of the two calibers – of which taken together 50,000 units rolled off the assembly lines in 2013, a figure expected to reach the 100,000 mark in 2016. TAG Heuer thus becomes Switzerland’s largest producer of series-made chronographs and one of the very rare companies capable of manufacturing its main components. Independence, technological innovation, state-of-the-art design … TAG Heuer now has all the firepower required to maintain its rank as king of the chronograph. (MdP)

Feminine to the depths

For over 30 years, the Aquaracer Lady has been a benchmark and a symbol of elegance. This sporty and refined watch now shows a new face. A dip into a maritime world featuring a blend of power and gentleness.

There’s no need to dive 300 meters below the sea to appreciate the new versions of the Aquaracer Lady. Elegant, sophisticated, sporty and yet eminently feminine, the Aquaracer Lady has been asserting itself for over 30 years as a model suited to daily or evening wear, as well as for diving or an ocean cruise. Long associated with the splendid Bo Derek who adopted in the 1980s, the Aquaracer collection has now been linked for several years with the face of Cameron Diaz – a charming screen icon who continues to make other women envious by wearing the finest interpretations of the Aquaracer Lady on her wrist.

After 10 years of ongoing success with no major changes, the design of the Aquaracer Lady is seeing a subtle shift this year. More elegant and chic yet as sturdy as ever, the Aquaracer Lady still celebrates the timeless ties between women and water through models with distinctive personalities. The sporting nature of the watch is undeniably present. Water-resistant to 300 meters, the Aquaracer Lady in its standard version is above all a watersports watch equipped with a unidirectional rotating bezel, a screw-locked crown as well as luminescent hands and hour-markers facilitating readability even in the shadowy world of abyssal depths. The new face of the Aquaracer Lady is in fact the sum of various small details. A new steel or steel & gold bracelet with H-shaped links, a new bezel design, alternating polished and brushed finishes… and last but not least, diamonds. Depending on the model, appearing in a 27 mm diameter for a more jewelry-watch approach or in a sportier 32 mm version, the Aquaracer Lady may be highlighted by a precious gem-setting on the bezel and hour-markers, or else on just the hour-markers of the steel & yellow gold version. Adding a glamorous touch echoing the world of the sea, the most precious variations are adorned with an attractive mother-of-pearl dial. These pleasing aesthetics are backed by excellent functionality for a chic nautical watch that is equally at ease in the water, on land or on the deck of a boat. (MdP)

The quintessence of the Jack Heuer spirit summed up in one watch : such is the most obvious character trait of the Carrera Calibre 17 Chronograph Special Edition. Designed in 2012 by Jack Heuer himself to mark his 80th anniversary, this model now comes in two new dial colors. The first version of this very special Carrera, graced by lines undeniably inspired by the original model, features silver-grey counters and inner bezel ring on an anthracite grey background ; while the second has blue counters and inner bezel ring on a silver-grey background. This 41 mm model with its pure broadly open dial radiates a subtly classic aura and is driven by a COSC-certified automatic movement. The two new versions are available in the brand boutiques – a fine way of extending the tribute paid by TAG Heuer to its honorary president as he takes his final bow. (MdP)