Rebellion: born on a race track 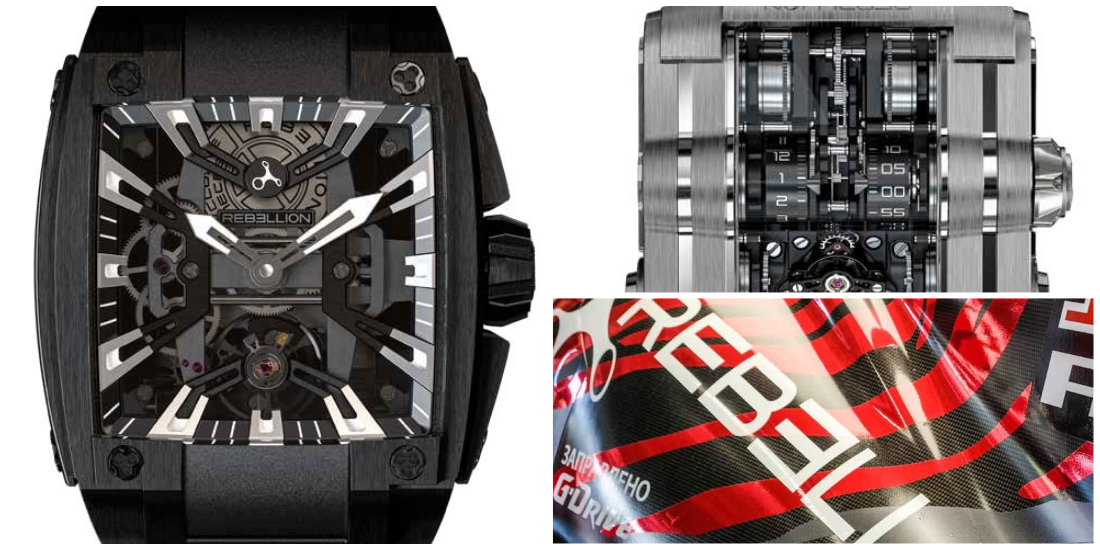 Rebellion Timepieces is a challenger in the world of Swiss watchmaking. Its passion for independence and a zero-compromise attitude enabled the creation of the company and continue to guide its development day by day. While sharing the same DNA as its sister company, the Rebellion Racing team, each Rebellion watch is directly inspired by motorsports. All the research, development and production of Rebellion Timepieces is done in Switzerland, in accordance with the highest quality standards. Living up to its name, Rebellion shuns existing market trends and prefers to go it alone and take its own road in the field of highend watchmaking. The 2018 vintage is profoundly imbued with this founding spirit.

For Rebellion, nothing is left to chance in the quest for exceptional quality and performance. Each watch is designed for those who share these ideals, created for the self-confident indi- REBELLION vidualist, the fierce competitor, the passionate devotee of mechanical perfection. Inspired by motorsports thanks to the brand team competing in the FIA WEC (World Endurance Championship), Rebellion creations are generally equipped with functions and complications stemming from this sophisticated adrenalinrich sport. Born on a race track, these timepieces often have chronographs with tachymeter scales serving to calculate speed based on distance and time, along with indications of the hours, minutes, seconds, date and power reserve. Rebellion Timepieces has innovated in the spirit of carbon fibers and multi-level dials. The base of the latter comprises a honeycomb structure ensuring absolute rigidity, while maximizing transparency and lightness. The aesthetic of the dials particularly evokes motorsports with models featuring touches reminiscent of racing car components such as turbines, alloy wheel rims, competition-style dials, brake disks, clutches and gauges.

Its daring and original character make the Predator S Three Hands a natural fit in the collection, with a smaller 42mm case and a form of simplicity that is so Rebellion. Revisited in a threehand plus date version, its contemporary design with the honeycomb motif exudes a more delicate, even feminine touch. Closely resembling a racing car with its date aperture recalling a fuel door, this model also features other motorsportsinspired characteristics including the multilevel dial with its honeycomb base its bezel secured by eight screws bearing the brand logo. Like its big sister, the Predator S is powered by a sturdy and accurate self-winding Swiss Made movement. The case features a large variety of technical materials : ceramics, carbon, stainless steel and titanium. This model is superbly decorated (sandblasted Black Gold, polished steel parts, bridge engraved with the logo, etc.) and provides a beautifully transparent view of the mechanism through its sapphire crystal.

Technical sophistication, lightness, purity : the RE-Volt refuses any form of compromise, perfectly embodying the very essence and philosophy of Rebellion. Smaller than the historical models, it features a square shape and a Manufacture movement with an incomparably bold style. Its sapphire crystal (which may be slightly tinted) embodies a fundamentally transparent approach to watch design. It highlights its skeleton-worked movement that is a perpetual reminder of the technical and stylistic boldness of a car chassis. Thanks to its exclusive caliber that is square to match the case design, its muscular shape, its high-tech vibe and its exceptional performance, each of its details expresses and encapsulates the passion for motorsports.

Beneath its superb exterior throbs an ultra-powerful ‘engine’. The sleek T2M pays vibrant tribute to endurance and to Rebellion’s beloved competitions. Part-watch, part-endurance racing car, the T2M is named after its unbelievable twomonth power reserve. To achieve this, it adheres to one sole law : that of performance. Machined from a single block of titanium, its sleek and angular bodywork houses an exceptional ‘V8 engine’ in which each cylinder is a barrel. They are all visible through the sapphire crystal matching its contours. This model can easily stand the comparison with those of the greatest watch Maisons. The T2M shatters the world endurance record with its 1,400-hour power reserve, the equivalent of two full months. Its revolutionary patented distribution system enables easier recharging with a few turns of a winding-lever cleverly built into the case. Such a break with existing norms calls for innovation and three years of R&D were required to forge its engine : an original Manufacture movement. The T2M is extraordinary on every level : in terms of its rectangular, oversized shape ; its design that is entirely different from traditional movements ; as well as its gear system exactly like that of racing cars. A pure distillation of innovation and performance.