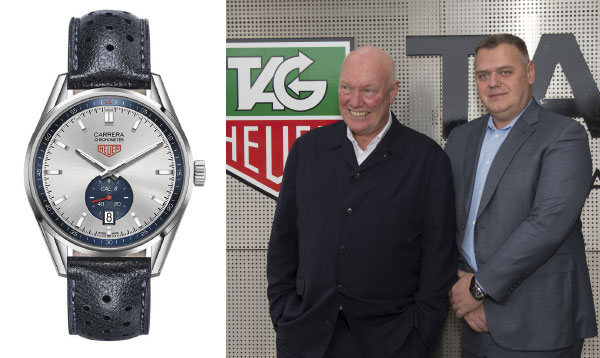 You embodied haute horlogerie at TAG Heuer, a brand that you are now leading on a path towards more accessible watches : isn’t this a paradoxical situation ?

Despite superficial appearances, this is not in fact a paradox. I entered the watch industry by chance 10 years ago to handle the V4, and I took root here. TAG Heuer called upon my experience in the field of technologies, but I was also an executive. The  businessman side of my personality was always there in the background when the adventure of TAG Heuer haute horlogerie led me to travel the world to form teams, talk with journalists, meet with clients and subsidiaries, all of whom discussed a lot of topics extending beyond haute horlogerie itself. I have long since been immersed in distribution issues relating to every country. Moreover, in the R&D department that I headed, the “R” was always in the spotlight but the “D” was also very important – notably in developing standard commercial products. I have always been strongly involved in the engineering side of things, notably putting in place development processes for mass-produced models in order to improve efficiency in the lead-times for development, homologation, quality certification, as well as to control production costs. Last year we did a lot of work on the next stage we should aim for, looking at what the resources acquired through these years of research in haute horlogerie could contribute to the company. My mission had been to write this chapter at the peak of the pyramid, and I was planning to turn the page and allow my passion to guide me towards other horizons.

Then Jean-Claude Biver was appointed at the head of the LVMH watch division and everything suddenly happened very fast. This encounter is right up there on the podium with the people who have most impressed me in my career, although at the age of 52 I’ve already met a fair few ! I was acquainted with him privately from a former stage in my life. I was seriously impressed by both his human qualities and his competence. Alongside his pragmatism and marketing genius, what is truly remarkable is his complete mastery of the business, after 45 years of practical experience. I was totally bowled over, because he is absolutely exceptional – a fact that has both advantages and disadvantages, given the degree of energy with which one has to try and keep pace. With him, you learn new things every day. Jean-Claude Biver is a visionary. I understood when he arrived the direction that a brand such as TAG Heuer could take. The kind of approach I developed for extremely expensive products must now be applied to bringing watches within reach of the broadest possible audience, which involves shifting into higher gear and doing things on an industrial scale, on commercial products, while nonetheless maintaining a disruptive attitude. I’ve been given a set of instruments that still includes R&D, along with operations, purchasing policy and the commercial dimension. This is about team work and TAG Heuer can rely on its remarkable personnel.

To deliver innovation at an affordable price while respecting the codes of Swiss watchmaking, for a relatively broad and youthful clientele. The brand’s mind-set is also evolving towards a less arrogant attitude. TAG Heuer is not Patek, nor Rolex, nor Omega: that’s the truth. We must know who we are, just like sailors and other sportsmen who demonstrate the kind of humility that enables them to reach their destinations.

Is the haute horlogerie segment due to vanish ?

Let’s say that we will no longer be actively competing in the haute horlogerie race. It has enabled us to delve into details, to physically understand what happens in watchmaking and to push the limits of high frequency. The innovations involved in the Mikrotourbillon and the Mikrogirder were necessary to form the teams and learn the technology, and TAG Heuer was even rewarded by the Aiguille d’Or award of the Grand Prix d’Horlogerie de Genève. This was truly a surprise in light of the magnificent traditional watch manufacturers and gifted independent watchmakers who were also competing. While this segment of timepieces will be abandoned, this technology must now serve to make fine products at reasonable prices. It’s a different story for the V4, which has been an icon for 10 years and is returning to Baselworld in Phantom mode.

What about future smartwatches?

We are working on this seriously, but in an even more modest manner than the rest, since we have no experience in the field. In any case, a Swiss smartwatch will not sell for five times the price of the Apple Watch and the latter is bound to affect the market for men’s and ladies’ quartz watches. It will take a bit of time and the number of models will skyrocket, but when the dust settles few players will be left.

Which are your bestsellers this year ?

As ever, the Carrera, our historical bestseller. We are unveiling at Baselworld a reinterpretation of the 1887, which is changing name because it’s an entirely different watch. My responsibility also consists in keeping our production unit in Chevenez (Jura) running, and we have boosted the 1887 with a brand-new image and extremely aggressive pricing. On the women’s side, we are enlivening the Carrera with a lot of energy reflecting that of our new muses such as Cara Delevingne. Overall, we are going to pare down the number of collections – five is too much. On the other hand, whereas the F1 was the range-entry level, topped by Aquaracer, the Carrera, with the Link and Monaco right at the peak, each line will now have products at various price points in order to reach a broader audience.

How are you backing up this new momentum ?

It’s still too soon to grasp the full extent of what we began six months ago, but we have defined four worlds in which TAG Heuer can express itself and win over a younger and wider clientele around the theme “Don’t crack under pressure” which everyone can relate to. Not only the 25-40 year olds who are our core target, but also those in the 15-25 range. We will thus be communicating in the fields of art (such as contemporary music and graffiti) ; lifestyle (with society movers and shakers such as Cara Delevingne) ; sport (including motor racing but also all sports disciplines that stir the emotions) ; as well as the history of our products that convey TAG Heuer’s watchmaking expertise, such as the Carrera and the Monaco. The brand is set to undergo a major paradigm shift.