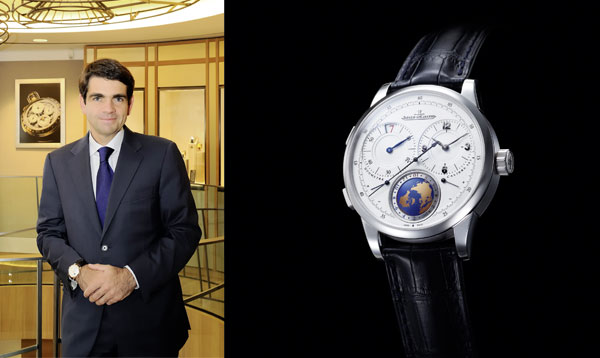 You have been at the head of Jaeger-LeCoultre since 2002; which do you feel are the best three decisions you have taken so far ?

With hindsight, the toughest and most important decision was to launch the extension of our Manufacture in September 2008, just when Lehman Brothers was crashing and sparking the economic crisis. The construction of this wing enabled us to develop new professions relating to the escapement, and without it our growth would have been radically different to that which we have enjoyed since 2009. In the same way, the renovation and the enlargement of our Place Vendôme boutique which is now spread over a generous 500 square metres represented a substantial investment. Nonetheless, the “watchmaking boutique” concept it symbolises delivers a unique horological experience liable to generate a sense of “before and after” by demonstrating the full range of skills cultivated by Jaeger-LeCoultre. The third strategic decision I would mention goes back to 2003 and involved reviving the Grande Complication models from the Manufacture, which have been testifying ever since to the heights of its watchmaking expertise.

What should customers expect for the 180th anniversary of Jaeger-LeCoultre in 2013?

In 180 years, the brand has given rise to 1,242 calibres and over 400 inventions. We have worked very hard on more closely defining the original inspiration of Antoine LeCoultre and the cofounders of Jaeger-LeCoultre, by taking a closer look at some major expressions of each of them in order to create a Jubilee Collection unveiled at the SIHH. Jaeger-LeCoultre will celebrate its anniversary by focusing on some landmarks in the film-making world, of which we sponsor a number of festivals in Venice, Shanghai, Abu Dhabi, San Sebastian and Estoril. Numerous projects relating to the 7th art art will also be conducted on other continents. Screenwriting the work of the Manufacture through the centuries in conjunction with institutions at the crossroads between art, culture and history, corresponds perfectly to our values and enables us to exhibit the major pieces from our collections. Moreover, the public will discover a new ladies’ model that reflects our horological nature and our ability to capture women’s attention that has been repeatedly demonstrated over the decades.

Will you be focusing on new Grande Complication models?

Yes indeed, the Hybris Mechanica collection, which is enriched each year since 2003 with a model featuring a world-first feature, will welcome its 10th variation. This collection now hosts a hundred or so different complications ! Above all, we are presenting our 180th anniversary Jubilee collection at the SIHH, based around three stellar models, of which one heralds a new line. The Jubilee Collection is thus composed of the Gyrotourbillon3 with spherical balance-spring and mechanical digital display, the Master Grande Tradition Quantième Perpétuel Tourbillon with cylindrical balance-spring and the Master Ultra Plate Jubilee featuring a 4.05 mm case making it the slimmest mechanical watch in the world.

Are you satisfied with the first results of your new feminine Rendez-Vous line launched this past autumn?

Its success is proving doubly encouraging: first of all because it is earning approval on all continents; and also because customers are often surprised to learn that it is a new line. This observation confirms the fact that Rendez-Vous is a truly natural line for Jaeger-LeCoultre. Several references were indeed already sold out in November – a result that has exceeded our highest expectations.

Is the Reverso still a dream watch?

Definitely! The brand’s bestselling model is still the Duetto Classique, with demand far exceeding supply. The 1920 – 1930s style it embodies continues to appeal as much if not more, in that special-shaped watches are attracting a growing following among women in developing countries, and correspond on markets such as the USA to current tastes for sophisticated and elegant watches among an urban masculine clientele. Since the launch of the new ultra-thin versions, the Reverso is gaining as much recognition for its horological substance as for the aesthetic equilibrium that has always been its traditional signature.

You have just opened a large watchmaking boutique on the Place Vendôme ; how do you see the future of multibrand retailers ?

Their role is essential. Some have been around for several generations and have managed to adapt to all manner of changes. The most successful are undoubtedly the retailers that have made specific choices and have established a brand strategy. For example, the major retailers in Singapore operate with around 12 brands. Moreover, they must also offer a number of services. Even in tough economic conditions, Italian retailers are continuing to develop and distinguishing themselves by offering peerless after-sales service quality. Finally, there are also options available via partnerships, such as we have just done in Lucerne with Bucherer. Like the brands themselves, retailers must adapt in order to pursue their expansion. Our fates are inextricably bound together, especially since the brands are having to play an ever more technical and selective game, requiring ever higher stakes in terms of capital. Not all brands can afford a boutique of their own. In a city like Hong Kong, it takes a million euros to open one, and then two more millions for the annual rent, and another for the stock. Without these four millions in cash, there is no question of setting up a monobrand boutique – and we are talking of just one point of sale here!

When will we see Jaeger-LeCoultre back at the Geneva Watchmaking Grand Prix?

Over the past ten years, brands have evolved considerably in terms of their communication and their image-related strategy, and I think this event must also change accordingly. Everyone has their own convictions in this respect, but some rethinking regarding this type of celebration is definitely required in order to ensure that the major brands find them meaningful and nurture a desire to be involved.